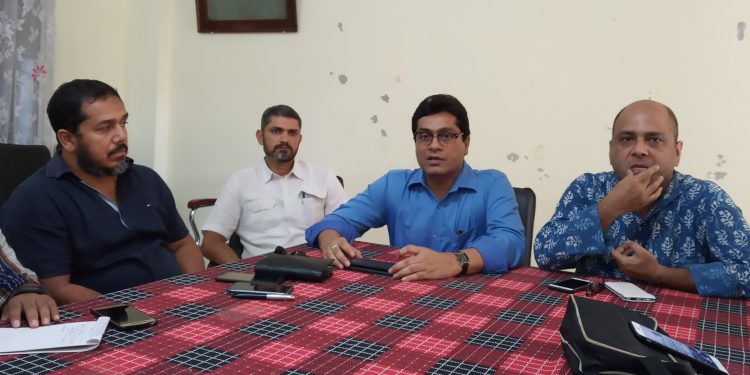 MP from Silchar, Dr Rajdeep Roy along with members of Jyoti, a socio-literary organization based in Silchar addressing the Press on September 19, 2019. Image: Northeast Now

Northeast India’s biggest quiz and debating contest is slated to be held on November 9 and 10 next in Assam’s Silchar.

The quiz and debates competitions will be inter-college and inter-university.

Disclosing this at a press conference held on Thursday evening, MP from Silchar, Dr Rajdeep Roy, informed, “North East Regional Inter College Invitational Quiz (NERICIQ) and North East Regional Inter College Invitational Debate (NERICID), which started its journey in 1990 under ‘Jyoti’, a socio-literary organization, is back and ready to host its 15th NERICIQ and 13th NERICID, next month.”

Dr Roy, said, “Jyoti, which came into being in 1989, was instrumental in creating a mass movement among the student fraternity to take part in quiz and debate competitions from all colleges across the north-eastern states, including universities of this region.”

He added, “Jyoti, not only catered to conducting quiz and debate competitions, but, also held merit tests on a regular basis to check the IQ level of the students.”

“This organization also held sessions with passed out college students to face group discussions and interviews, to shape up their career,” he further said.

Ravi Patoa, a founder member of Jyoti, and a chartered accountant by profession, speaking to Northeast Now, said, “We have done not just holding quiz and debate contests in the past, but, have been able to create a niche for the student community to participate actively in building our nation, our society.”

He added, “Post 2012, Jyoti, and these sorts of debates and quiz contests, came to an abrupt halt and now we are going to revive it back and keep it going with an extensive membership drive in next few months to come.”

To keep the student community abreast of the forthcoming NERICIQ and NERICID contest, Gaurav Paul, PRO of Jyoti, speaking to this correspondent, said, “Every Sunday before the forthcoming event we would conduct a quiz contest in the Goldighi Municipality Mall in Silchar to create awareness and rope in students to join this socio-literary club, Jyoti.”

Gaurav Paul added, “Jyoti also has in its pipeline to set up an IAS coaching centre very shortly in Silchar Town, for passed out students of this region to crack this test and succeed in becoming and IAS officer.”