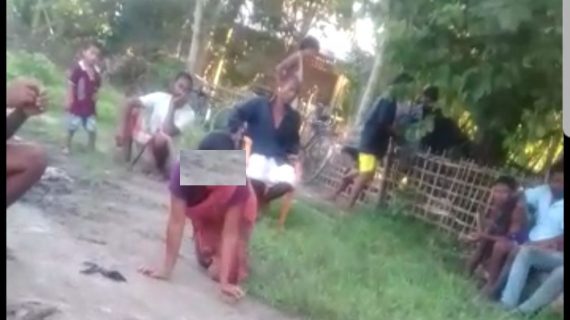 In another incident of moral policing in Assam, a woman has been compelled to crawl on ground by the locals in a village in Lakhimpur district along the Lakhimpur-Majuli border recently.

The incident took place at Luit-Khabalu area in Lakhimpur district four days back.

However, this came to light on Monday when the video of the incident went viral in the social networking site.

The woman was ‘punished’ by the moral police as she was allegedly maintaining extra-marital affairs with a youth of the village, which was a ‘crime’ for a section of villagers of the locality.

This incident has created massive sensation in Majuli, which is the largest island in the world.

In the video, the woman, who was wearing mekhela-chador, was compelled to crawl in presence of a section of villagers. The woman after completing two rounds of crawling stood up as seen in the video.

According to media reports, Lakhimpur Superintendent of Police Sudhakar Singh stated that legal action would be taken against those villagers, who were involved in the moral policing incident.

It may be mentioned that incidents of moral policing have gone up across the State in which a section of people take the law into their hands.