PM Modi is one of the strongest world leaders who can tackle terror and would do the same in the context of Pulwama attack: Shah 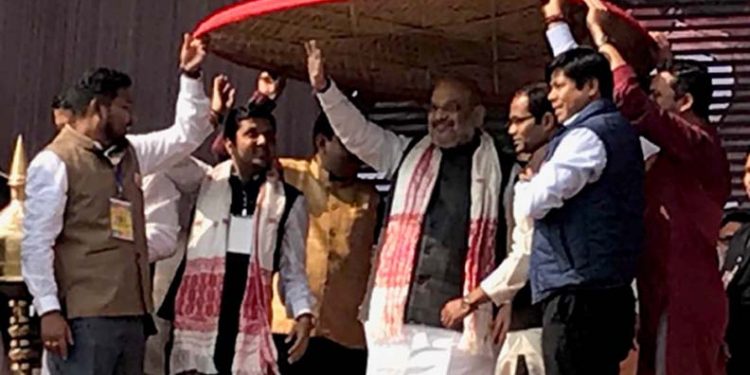 Amit Shah said this while addressing a huge gathering at a youth rally organised by the Bharatiya Janata Yuva Morcha, the youth wing of the BJP at Chandmari near Lilabari airport on the outskirts of North Lakhimpur town.

It may be mentioned that the Citizenship (Amendment) Bill, 2016, which was passed in the Lok Sabha on January 8, 2019, could not be tabled in the Rajya Sabha on the last day of the last session of the Upper House as it was adjourned sine die.

Addressing the gathering, Amit Shah said, “NDA will form government at the Centre again under the leadership of Modi ji and bring back the Citizenship (Amendment) Bill to bring an end to infiltration.”

He also promised to push back the infiltrators out of Assam if the BJP returns to power this time.

Shah came down heavily on the Congress and Asom Gana Parichad (AGP) for opposing the Citizenship (Amendment) Bill, 2016 and “doing nothing” after signing of the Assam Accord.

BJP president Shah also said, “Prime Minister Narendra Modi is one of the strongest world leaders who can tackle terror and he would do the same in the context of Pulwama attack.”

Talking tough against terrorism which is inflicting the country, Shah said that any such attempts would be repulsed with greater and resolute manner.

The BJP president also claimed that the work of National Register of Citizens (NRC) was the result of the saffron party’s initiative.

Presenting a report card of the Narendra Modi-led NDA government, Shah said that during the NDA regime, Rs 1,55,000 crore has been provided to Assam under the 14th Finance Commission as compared to Rs 89,000 crore provided by the earlier UPA government.

He also appealed to the youth to vote for the BJP in the coming Lok Sabha polls for development and strengthen the 133 schemes undertaken by Prime Minsuter Modi.

The rally began with Swaheed Tarpan in memory of the martyred CRPF personnel in Kashmir’s Pulwama district. The tribute paying ceremony was led by BJP president Shah along with other dignitaries who observed one-minute silence for the departed souls.

He stated that Assam would emerge as the best state in the country in the coming days for which the youth should take a special role.

The Assam CM urged the youth of the state to capture the market of South East Asia by virtue of skill development opportunities provided by the present government in each rural development block.

Sonowal said conferring of Bharat Ratna to Dr Bhupen Hazarika, and Padmashree to Uddhab Bharali and Dr Ilias Ali were the recognitions for their works and acts. He also appealed to the youth to work hard for making the fertile soil of this land worthy.

Minister Sarma asked the youth to make ‘Bajra Ninad’ for development and save Assam from becoming another Kashmir.

Sarma slammed the All Assam Students’ Union (AASU) and other organizations for supporting the neo-Assamese people and appealed to the youth not to submit before them.

Minister Sarma also expressed his concern on the future of some areas under constituencies like Nowboicha, Bhabanipur, Rupohi, Dhing, Goalpara, South Salmora and said “Assamese people are minority in 14 districts of Assam”.

He also said, “Satra lands in Assam including the birthplace of Srimanta Sankardev and the Kaziranga National Park had been in threat from encroachers.”