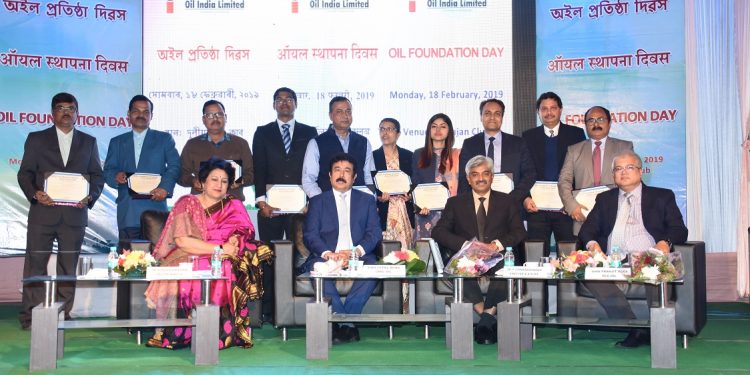 The 61st foundation day of Oil India Limited (OIL) was observed with a lot of fanfare in the field headquarters of the company at Duliajan on Monday, a press communique received said.

The main attraction of the evening was the release of OIL’s Corporate theme song by Utpal Bora. Zubeen Garg is the main lead singer of OIL’s theme song.

The annual HOPE awards (helping our people to excel) that recognises the achievements and contribution of the officers and employees of OIL on their work front were presented on the occasion.

In all, 115 awardees (17 team based and 11 individual based categories) received merit certificates and financial incentives as part of the HOPE award scheme. Winners of OIL’s national level essay competition which was organised as a part of the 60 years’ celebrations of the Company were also presented on the occasion.

In his address, Utpal Borah, CMD, OIL complimented the HOPE awardees and appealed to all Oilindians to give their best efforts to help the Company perform even better in the coming years.

He mentioned that OIL had a unique culture and the people of the operational areas had a strong emotional bonding with the Company.

He appealed to all stakeholders to extend their continued support to the company so that Oil India Limited grows from strength to strength.

Addressing the gathering, Rupshikha Borah, Director (Finance) expressed her gratitude to the founding fathers and pioneering oilmen who had made a lot of sacrifices in those early years, which have enabled OIL to become a Navratna PSU with global presence.

In his speech, P Chandrasekaran, director (Exploration and Development) shared his conviction about the bright future of OIL mentioned that there is still a lot of hydrocarbon reserves yet to be explored in the Assam-Arakan Basin and the company could easily survive for another hundred years with such reserves.

In his welcome address, Pranjit Deka thanked CMD, OIL for his gracious presence on the occasion and gave a brief account of OIL’s corporate history as well as present human resource and production profile. Shri Ashish Bahukhandi, Executive Director (Info com and Digital Oil Field) delivered the formal vote of thanks.

The evenings programme which was anchored by Tridiv Hazarika, DGM(CSR&CC) and spokesperson of OIL began with a two minutes’ silence in memory of the CRPF personnel who lost their lives in the suicide bomb attach in Awantipora of Jammu Kashmir’s Pulwama District as well as all departed Oilindians

Earlier in the day, Foundation day marathon was held which saw a huge response with around 400 participants from various parts of India. Bijoy Deka won Rs 60,000 in the 42 kilometre men’s category while Shyamali Singh won Rs 40,000 in the 21 kilometre women’ marathon. In all ten athletes in each category won cash incentives.