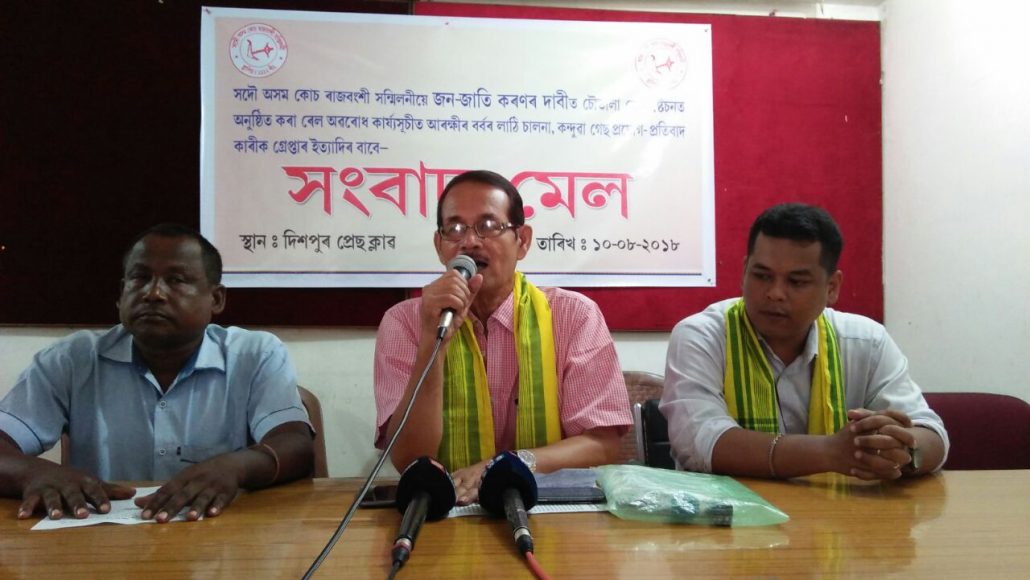 The All Assam Koch Rajbonshi Sanmilani has decided to boycott the ensuing Independence Day celebration and called for a 36-hour shutdown from 5 am on August 14 till 5 pm on August 15 next.

The organization has also decided the wear black badges on Independence Day.

Addressing a media conference in Guwahati on Friday, the organization said that they have embarked on this protest protest demanding Scheduled Tribe status and also protesting against the high-handedness of police at the Soutara under Gosaigaon area on August 6 last.

Police resorted to baton charge and firing blank shots in the air in Soutara under Gossaigaon in Kokrajhar district of Assam to disperse the protesters whose ‘rail roko’ agitation had disrupted train movement across the State.

The incident took place around 11.30 am on that day, when the police suddenly resorted to lathi-charge.

At least 15 leaders of All Assam Koch Rajbongshi Sanmilani were arrested.

Bireswar Saikia, the president of the Sanmilani while addressing the media on Friday alleged that the police resorted to lathi-charge without any prior warning.

He also alleged that the Central Government has been taking the ethnic communities for a ride in the pretext of holding negotiations.

He also demanded immediate release of all those arrested on the day of the rail blockade programme.

The president of the Sanmilani also said demanded an impartial inquiry into the whole incident of lathi-charge on the protestors at the Soutara railway station on August 6.

He further lamented that the BJP-led government at the Centre had promised to grant ST status to the Koch Rajbonshi community of the State within six months of attaining power in New Delhi but is yet to keep its promise even at the threshold of completing its term next year.