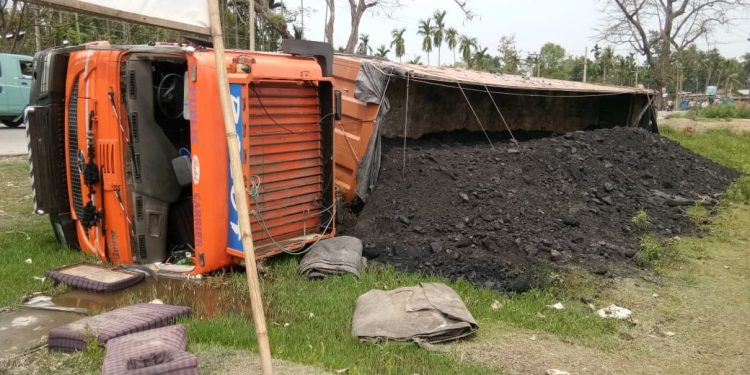 The traders involved in the alleged smuggling of coal from coal mining sites in Tinsukia district of upper Assam has recently shifted  the route  of carriage of alleged illegal ‘black golds’ from the National Highway 37 to National Highway 15 via Kaliabor.

This was evident from a road accident involving a truck loaded with coals without valid documents and papers along the National Hospital 15 at Kharupetia in Darrang district last night.

The truck heavily loaded with coal bearing registration number RJ-02-GB-7355 coming from Jagun of Margherita in Tinisukia district with its destination to Bihar met with the accident and the driver of the truck was immediately shifted to Guwahati in a critical stage.

However, the handyman of the truck has been taken to Kharupetia police station.  According to information till filing of this report, the handyman failed to produce any documents or permit for transporting the coal.

Sources said that government has allowed carrying of coal only from Coal India Ltd, however, it has often been often alleged that most of the time the coal loaded trucks coming from Tinsukia try to convince the police intercepting them with some forged official documents including invoice of the Coal India Ltd and the GST payment receipt.

An organized circle in Tinsukia has reportedly been managing a section of senior police officials.

Earlier in the month of February, superintendent of police of Darrang, Amrit Bhuyan acting tough against this alleged illegal practice had seized six numbers of coal laden trucks for their failure to produce the requisite papers including the valid invoice of Coal India Ltd with official seal and signature.

This resulted in the sudden withdrawal of the movement of these coal laden trucks through the National Highway 15.

However, taking the opportunity of the acute activities of Darrang Police in view of ensuing general election these unscrupulous elements have re-started their practice through the national highway passing through Darrang district.