At a time when the forest cover of Assam is fast depleting, deforestation in the name of development raises quite a few eyebrows.

The case in point is the National Highway 315-A project that falls within 10 km of the boundary of the Dihing Patkai Wildlife Sanctuary.

The highway expansion along that stretch of the wildlife sanctuary would mean cutting down thousands of valuable trees and disturbing the fauna of the region.

Though the activities regarding expansion of the highway were halted in 2016 after an RTI was filed by some conscious environmentalists, it is learnt that clandestine activities have resumed since end of last year.

And very recently, soil samples were reportedly collected from Jeypore area where a flyover is proposed to be constructed.

The road connects TInsukia in Assam and Khonsa is Arunachal Pradesh via Jeypore-Humanjuri in Dibrugarh district. 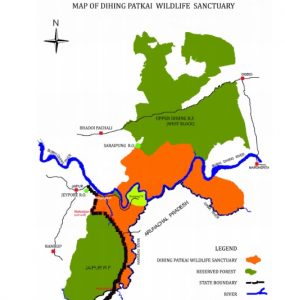 The activities first began in 2016 that included debarking of the trees and slicing the bark of the trees on both sides and painting on it and putting numbers.

When an RTI enquiry was made in this regard, the office of the Principal Chief Conservator of Forests (Wildlife) while citing ignorance forwarded the application to the Dibrugarh Forest Division.

The information provided by the Dibrugarh Forest Division revealed that the project authority who has executed the activities were illegal and threat to the Dihing Patkai Wildlife Sanctuary and the jeypore Reserve Forest.

According to sources, the project authorities also have no permission which is mandatory from the Chief Wildlife Warden.

The area is also an important bird area with more that 400 species of birds including five species of hornbills and 299 species of butterflies.

Also, the Dihing Patkai Wildlife Sanctuary and Jeypore Reserve Forest has been a natural dwelling home of as many as 107 orchid species.

Widening of the existing road, that is National Highway 315-A from Jeypore-Nagaghat to Huakanjuri would threaten both the wildlife sanctuary as well as the reserve forest.

The widening of road would destroy the canopy over the road, which would create problems for the canopy dwellers like hoolock gibbon and red giant flying squirrel.

The road widening would also eliminate the natural salt well at Naharjan which is used by the elephants and other animals.

The destruction of the salt well on the other hand would also create human-elephant conflict in the area in near future.