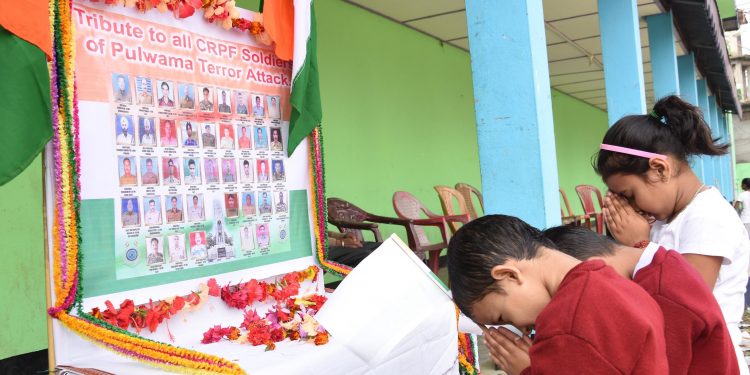 Students of Bakalighat national English school pay tribute to the martyrs of Pulwama during condolence meeting at Bakalighat on February 21, 2019. Image by UB Photos

Following the direction of Assam chief minister Sarbananda Sonowal, media adviser to the Chief Minister Hrishikesh Goswami along with PHED minister Rihan Daimary and MLA Tamulpur Emmanuel Mosahary visited the house of martyred CRPF jawan Maneswar Basumatary, who was killed in the suicide bomb attack by militants at Pulwama in Jammu and Kashmir, at Tamulpur in Baksa district on Thursday and handed over the approval letter of Rs 20 lakh to his wife on behalf of the State Government.

Notably, chief minister Sonowal had announced financial aid of Rs 20 lakh to the family of the martyred soldier on February 15 last and the approval letter of the same was handed over on Thursday in presence of the son and the daughter of late Basumatary and other residents of the village.