As part of Saksham, Petroleum Conservation Research Association (PCRA) under the aegis of Ministry of Petroleum & Natural Gas, Government of India has been organizing campaign to sensitize the consumers about energy conservation efforts in the country since 1978.

Over the past 30 years, PCRA has helped consumers in different sectors such as transport, industry, agriculture and household to realize energy conservation to a great extent. 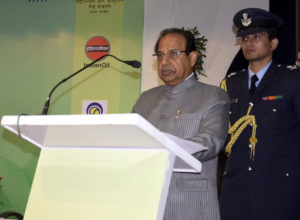 Speaking on the occasion, Prof Mukhi said, “As we are all working for double digit economic growth for the country, the energy demand is bound to grow at similar pace. The country’s source of energy basket which grossly constitutes petroleum products, is also diminishing at fast rate. While we are recognizing and adopting measures to increase our dependency on renewable energy sources, the demand for petroleum products as source of energy is still growing. India has huge deficit in crude oil production level compared to its consumption pattern.”

He urged upon the consumers at large to take a pledge to use energy judiciously.

However, these figures are hugely offset by the fact that the country’s crude oil production was merely 36 million metric tons in the same year.

Drawing the attention of the people, the Governor said the country’s import bill is high and always dependent on global crude oil prices, rupee depreciation as well as rise in domestic consumption.

However, sufficient refining output has reduced import dependency on petroleum products and the country has been able to export finished products to contain the foreign exchange deficit to a little extent.

The Governor also hailed the efforts of PCRA and public sector oil and gas companies for undertaking intensive conservation awareness campaigns among the masses throughout the country and also appealed to all concerned to actively participate in this great cause and transform the campaign into way of life.

Synchronising with the event, IOCL, as part of Corporate Social Responsibility (CSR), handed over a cheque of Rs 20 lakhs to Kamrup Metropolitan District Administration for upgrading the infrastructural facilities of Umananda Temple situated at the Peacock island making them more tourist friendly.