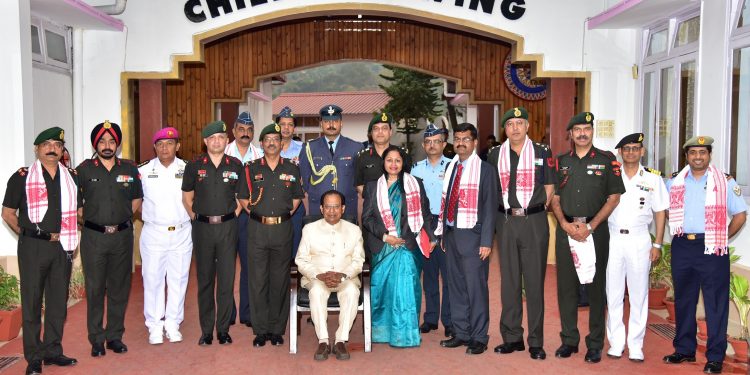 Assam Governor Prof Jagdish Mukhi spent time with the officers of armed forces, civil and police services and interacted with them about their job profile and mandate of service.

Governor Prof. Mukhi also apprised them of Assam, its demography, its socio-cultural, political and economic characteristics at Raj Bhavan in Guwahati on Monday.

It may be noted that a delegation from National Defence College comprising 14 officers called on Governor Prof Jagdish Mukhi at Raj Bhavan and talked to him on several issues.

The Governor informed them of the State Government’s mission of bringing about an overall change for all round development of the State.  He drew the attention of the officers of Assam’s rich and abundant natural resources, human resources and its diverse heritage in the fields of culture and demography.

He also said that economy of Assam is mainly agro and allied industry based and to give emphasis to agricultural development, multi-cropping system are being practiced in the state. Along with this, extension of research activities and skill upgradation of farmers has been taken up to double the income of farmers to achieve Prime Minister’s mission of doubling farmers’ income by 2022.

The Governor said that he felt happy to be interacting with the officers as he held highest regards about their mandate. He also hailed the service rendered by the defence forces and asked them to emulate the rich legacy of the country’s defence forces. The Officers on the other hand expressed their happiness to be able to meet the Governor.

The officers of the delegation belong to Indian Armed Forces as well as from Civil Services and officers from friendly foreign countries. The group will tour Assam for five days and familiarize themselves with the socio, economic and political aspects of the State.

The group led by major general S C Mohanty, AVSM, senior directing staff are expected to visit and study various facets of state administration from the grass root to the high level.