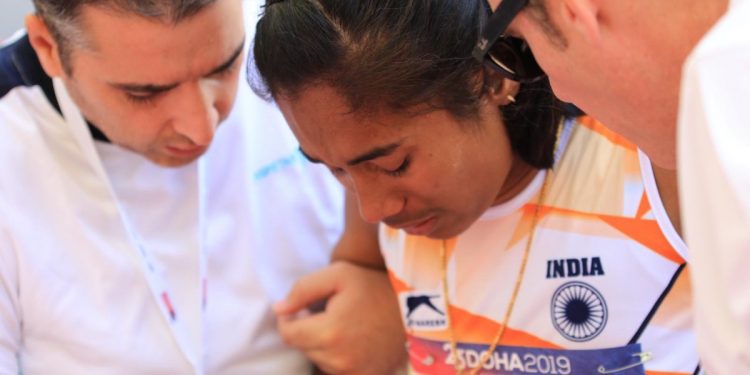 File image of Assam girl Hima Das crashing out of Doha event due to 'back pain'. Image courtesy: Twitter/@afiindia

Here is a piece of heart-breaking news for the sports lovers of Assam.

The state’s golden girl sprinter Hima Das’s participation at the 4×400 metres World Relays to be held on May 11-12, 2019 at Yokohama, Japan is hanging in balance.

Even her future career in the track is at stake.

The young athlete has been diagnosed with spondylitis of the lumbar vertebrae, essentially the lower back.

Hima dubbed as the ‘Dhing Express’ may now be required to go through a period of rest and rehabilitation along with medication.

According to reports, Hima had started training with the relay squad earlier this week and the squad is currently camping in Yokohama.

But she needs to do some exercises and will also need some rest and rehabilitation as part of her recovery, as her progress is being monitored carefully, reports further added.

Hima is likely to travel with the 400 metre batch of athletes to Spala, Poland, for an overseas camp where she will continue with her rehabilitation.

Earlier, Assam’s sprint queen was selected as part of India’s Women 4×400 metre relay team for the 2019 International Association of Athletics Federation (IAAF) World Relays after she was declared fit.

Apart from Hima, the other three women to have been selected for the women’s team include M R Poovamma, V K Vismaya, Saritaben Gayakwad, Prachi and Sonia Baishya.

Prior to that, Hima had been pulled out halfway through women’s 400m semi-finals due to lower back pain at the  23rd Asian Athletics Championships held at the Khalifa International Stadium at Doha in Qatar.

The World Relays is considered as an important event in terms of qualification for the World Championships which takes place in September to October and the next year’s Olympic Games.