People’s Tribunal should have heard representatives from all such stakeholders, preferably somewhere in Assam: FACAAB 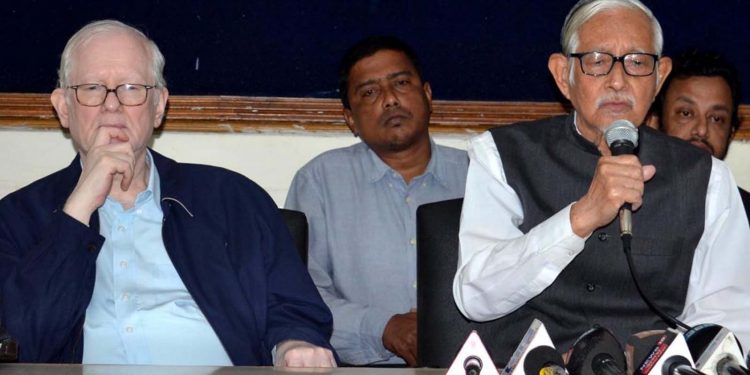 The Forum Against Citizenship Act Amendment Bill (FACAAB) has rebutted the claim of a ‘People’s Tribunal’ that the ‘NRC has spawned a humanitarian crisis’ without any sign of abetment.

The ‘People’s Tribunal on NRC’ published an ‘Interim Jury Report’ on September 9.

The Tribunal consists of two former Supreme Court Judges, a former Chief Justice of the Delhi High Court, besides some intellectuals, mostly from outside Assam.

“Surprisingly, the Tribunal held it’s hearing at Delhi calling interested witnesses selectively instead of at some place in Assam for reasons best known to them,” the FACAAB said in a press statement.

“Had they come to Assam and heard the views of native peoples they would have become aware of vital issues they have overlooked,” said the press statement issued by FACAAB chairperson & intellectual Dr. Hiren Gohain and convenor Manjit Mahanta.

The FACAAB stated that the National Register of Citizens (NRC) has many stakeholders and “the People’s Tribunal should have heard representatives from all such stakeholders, preferably somewhere in Assam”.

Stating that the Supreme Court closely supervised all the stages during the preparation of the NRC, FACAAB said, “The procedure adopted was accepted by all concerned including political parties as well as the youth and student organizations of different communities.”

There were 3.38 crore applicants and more than 19 lakhs have been left out of the final NRC evidently for their failure to prove their citizenship to the satisfaction of the authorities concerned.

The Forum also said, “We are not holding brief for the NRC authorities to say that the exercise was one hundred percent correct but in such a gigantic exercise it is not surprising that there could be some mistakes for which a further process of rectification has to be there.”

FACAAB said the Tribunals under the Foreigner’s Act seem to be given this task by the Government.

“We object to this decision of the Government, since the fate of those left out of the NRC will remain in uncertainty for procedural delay and the past examples do not give any confidence.”

“We admit that the detention camps where the alleged foreigner are made to languish for years have inhuman conditions causing immense misery to the inmates including deaths,” it said.

The Forum demanded that the “NRC authorities ought to continue hearing various complaints of anomalies in impartial manner, at least for a year”.

It needs to be stated that the indigenous communities are not only losing land and livelihood but their socio-political space is also under constant pressure of illegal migrants.

While defending some people’s right, the original inhabitants’ birthright can’t be jettisoned.

“We feel that despite various complaints of anomalies against the NRC, the records so prepared and digitally preserved have created a valuable base for identifying illegal migrants and these documents can be upgraded in future by means of a transparent and unbiased procedure.

“Total rejection of this record for whatever reason will only perpetuate uncertainty and more complications in future. The real victims will be the indigenous communities,” the Forum added.