A pan-India ‘Save Rhino’ campaign to spread awareness about the one-horned rhinos by the Nature Care and Tourism Foundation, a Guwahati-based organisation reached Kokrajhar on Friday.

The team was accorded a warm welcome by Assam Forest Minister Pramila Rani Brahma at Choraikhola forest bunglow in Kokrajhar with traditional aronai.

Assam Forest minister Pramila Rani Brahma lauded the initiative by the Nature Care and Tourism Foundation. She said, “Rhino is not only the pride of Assam but the whole of India.” She said it needs a collective effort to stop poaching of rhino and other wildlife.

Foundation President Julin Baruah said during the tour the team will be visiting all the major pilgrimage places of India to spread awareness about the one horned rhinoceros, organise seminars at all major universities of India and institutions including IITs, IIMs, colleges, schools to promote one-horned rhinoceros, meet and convince people from the film fraternity and major political parties to promote the campaign.

“We will be meeting people of the film fraternity of all the States like Bollywood, Tollywood for instance to promote Save Rhino Awareness Campaign. We will request all responsible political parties of our country to support and promote one-horned rhinoceros,” Baruah said adding, “We will be organizing discussions amongst the motorsports community of India to promote One Horned Rhinoceros, for which Cross Adventure Team, Assam (CAT) has been assigned. 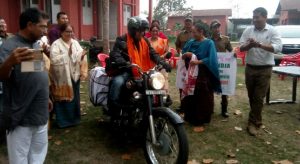 He also said, “We conducted flood relief campaign with the support of the people of Guwahati in Golaghat district in July and August, 2017, to spread Save Rhino Awareness Campaign, conducted Flood Relief Campaign and free health check-up-cum-free medicine distribution for the people of Kaliabor with the help and support of the Indian Academy of Paediatrics Assam Branch 2017 with more than 40 renowned doctors of Assam to spread Save Rhino Awareness Campaign.”

“We were blessed to be a part of the opening elephant ride of the Kaziranga National Park in October 2017 and participated at the walking zone for health and wellness of the society to promote Save Rhino Awareness Campaign in October, 2017,” said Baruah.

He also said, “We participated at the Brahmaputra Film Festival and interacted with the noted Bollywood director Nagesh Kukunoor to make movies on Assam Tourism and Kaziranga National Park and one-horned rhinoceros in September, 2017.”