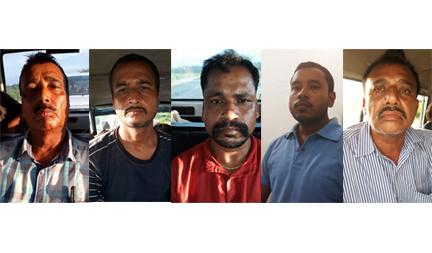 Five fake ULFA (I) members were arrested on Thursday morning in a joint operation by Tinsukia police in Tinsukia district of Upper Assam.

According to police, they were involved in fake extortion racket and collecting money in the name of the banned outfit. The entire operation is a joint cooperation of Sivasagar, Jorhat and Golaghat police led by Tinsukia police.

Police seized cell phones and SIM cards along with Rs 2 lakh from the possession of the arrested five accused persons.

“This group has been very much active in the upper Assam and collecting money in the name of the rebel outfit. From many days we are behind this fake ULFA group and with the help of other district police we apprehended them. Our interrogation is on because many more people are associated with this group,” said a police official of Tinsukia police station.

According to police, they demand money from the businessmen of upper Assam in the name of the ULFA (I).

“They know very well that businessmen will give money if they told them that they will belong to ULFA (I). Through this means they are collecting huge amount of money by taking the name of ULFA (I),” a police source said.

Meanwhile, many such groups have been come out in recent past, who are collecting money in the name of the banned outfit.