Tezpur, Kaliabor and Dibrugarh recorded 10 per cent of polling till 9 am while Lakhimpur recorded nine per cent and Jorhat recorded 12 per cent 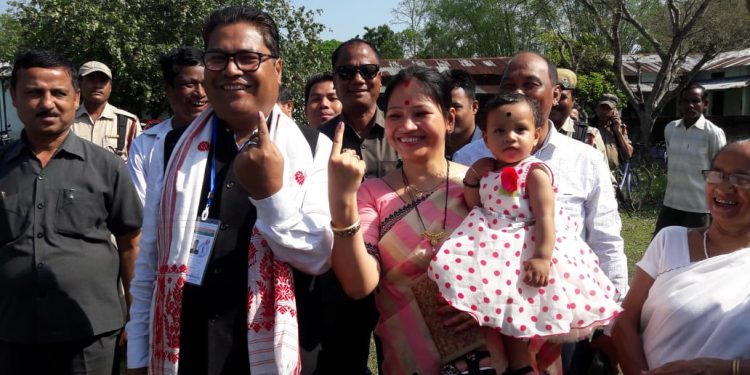 Assam power minister and BJP candidate for the Jorhat parliamentary seat, Topon Kumar Gogoi along with his family at Sonari after casting vote. Image: Parswajyoti Gogoi

An average of 10.2 per cent of votes have been cast in the first two hours at the five Lok Sabha constituencies of Assam that went for polling in the first phase.

As per the official reports issued by the State Election Department, Tezpur HPC, Kaliabor HPC and Dibrugarh HPC recorded 10 per cent of polling till 9 am while Lakhimpur HPC recorded nine per cent and Jorhat HPC recorded 12 per cent.

Long queues were witnessed in all polling stations across the five constituencies in the State.

In Sivasagar Election district, Thowra Assembly segment recorded 13 per cent voting till 9 am while Amguri recorded 12 per cent and Sivasagar recorded 11 per cent polling for the Jorhat HPC in the first two hours.

Polling is reported to be peaceful in all the 506 polling stations in the district till the filing of this report.

While one Assam Police constable and one home guard has been posted at all polling stations, around 84 polling stations in Sivasagar election district identified as sensitive have been manned by para-military personnel.

Meanwhile, State power minister and BJP candidate for the Jorhat parliamentary seat, Topon Kumar Gogoi has cast his vote along with his family at Sonari in the district.

After casting his vote, Gogoi appealed to all to exercise their franchise towards strengthening the democracy of the country.