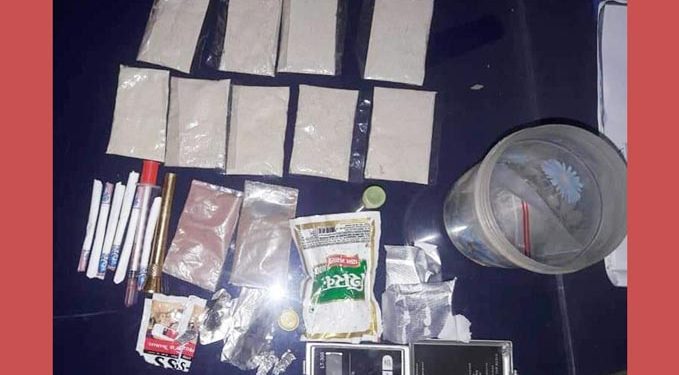 Following a search operation, the Dhemaji district police nabbed seven drug peddlers including a minor from Leku Jelom village under Jonai police station on Tuesday evening and seized about 50 gram of heroin from their possession.

The police team led by Jonai Sub-divisional Police Officer Rituraj Doley following a tip-off conducted a raid in two grocery shops at Leku Jelom Model village and recovered the drugs along with some packets of narcotics, which they concealed therein.

A case under NDPS act has been registered in Jonai police station and the accused involved with the drugs trade (excluding the minor) were remanded into judicial custody on the next day.

They receive drugs from some Guwahati-based smugglers for selling at boundary area bordering Arunachal Pradesh.

There is an inter-state racket of the drugs peddlers, who are conducting the illicit business targeting the youths of the region.

The police, however, are unwilling to disclose more in this regard for the sake of further investigation.

Earlier too, the Jonai police nabbed a number of persons involved with drugs trade from the area and charged them under NDPS acts.

The Dhemaji district police have sought help of Arunachal Pradesh to conduct joint drive against drugs trade along the boundary area, which is prone to movement of criminals and anti-socials.

On the other hand, women activists of Leku Jelom in Jonai sub-division destroyed several acres Marijuana (bhang) cultivation near Poba Reserve Forest. It is said that the young boys of the area are falling into addiction of the narcotics and spoiling their valuable future.

The Jonai Senior Citizens’ Union with the help of local Mising students (TMPK) conducted a series of campaign against use of alcohol, narcotics and contraband drugs in Jonai villages last year.

But, their effort was discontinued on the wake of last panchayat and parliamentary elections in the state, which indirectly encouraged the illicit traders to carry on their business.