The APCC president Ripun Bora has written to the former President with a request to give the RSS meet a miss.

Mukherjee is scheduled to address a gathering of RSS cadres in Nagpur on Thursday. 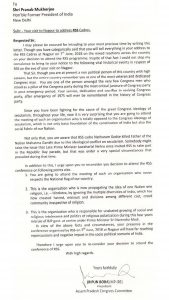 Bora, in his letter, has tried to ‘convince’ the former Congress veteran that he should ‘reconsider his decision to address members of the organization to which the killer of Mahatma Gandhi, Nathuram Godse was associated’.

Bora wrote, “Since you have been fighting for the cause of the great Congress ideology of secularism, throughout your life, now it is very surprising that you are going to attend the meeting of such an organisation who is totally opposed to the Congress ideology of secularism, which is not only basic foundation of the constitution of India but also the social fabric of our Nation. Not only that, you are aware that RSS cadre Nathuram Godse killed Father of the Nation Mahatma Gandhi due to this ideological conflict on secularism,” the letter further stated.

Bora further wrote, “I could not stop my conscience to bring to your notice that though you are at present a non-political person of this country with high esteem, but the entire country remembers you as one of the most veteran and dedicated Congress man. You are one of the persons amongst the very few Congress men who stood as a pillar of the Congress party during the most critical juncture of Congress party in post emergency period. Your service, dedication and sacrifice in reviving Congress party, after emergency of 1975 will ever be remembered in the history of Congress party.”