Bora in a letter on Monday appealed to union home minister Amit Shah for his intervention to stop the NRC reverification process.

In the letter, Bora also said the NRC authority has hurriedly issued thousands of notice to different persons across the state fixing August 5, 2019 as the date for re-verification of the draft list of NRC.

“The Supreme Court had already rejected the proposal for 20 per cent re-verification of the draft NRC list,” Bora stated in the letter. 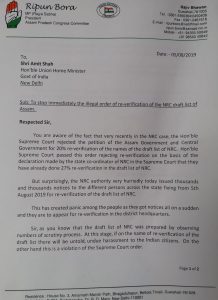 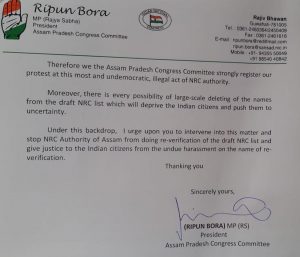 “The Supreme Court had earlier rejected the proposal put forward by NRC coordinator for re-verification…But today’s move has created panic among the people as they got notice all on a sudden and they are to appear for reverification in the district headquarter,” said Bora.

“I urge upon you to intervene into this matter and stop NRC authority in Assam from doing NRC re-verification and give justice to the India citizens from undue harassment in the name of NRC reverification,” Bora wrote in his letter to Shah.