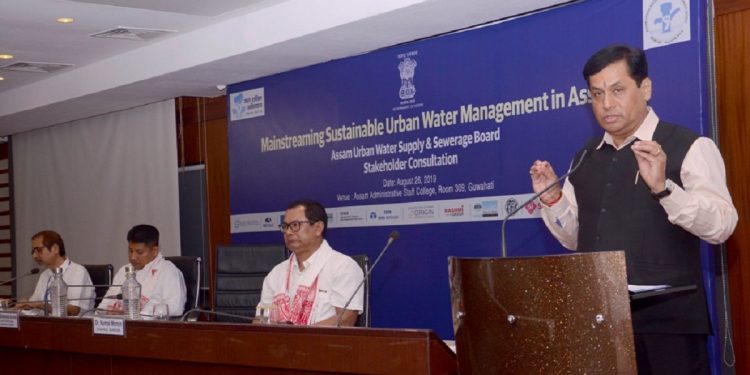 He was addressing a stake holders’ consultation on Mainstreaming Sustainable Urban Water Management.

The meet was held at Assam Administrative Staff College in Guwahati.

He also said that people in general should join hands and contribute towards water conservation.

Chief minister Sonowal also said that under Jal Shakti Abhiyan, his government is committed to provide drinking water to all households.

Maintaining that water is the source of all kinds of energy, Sonowal said that Brahmaputra with its 121 tributaries and Barak with its 11 tributaries have created a well-coordinated network of availability of water.

He also said his government will adopt a mechanism for conservation of rain water to be used especially during the lean period.

Sonowal also said that taking a proactive step for the conservation of water, the student fraternity of the State should be adequately mobilized.

He said that the teachers and parents should motivate their students and wards to imbibe in them the traits for conserving rain water.

The chief minister also said that the government is working dedicatedly to provide 68 lakh families in Assam pure drinking water on all 365 days.

The workshop was organised by Assam Urban Water Supply and Sewerage Board.

Minister of State for Urban Development Pijush Hazarika was also present in the workshop.

Speaking on the occasion, he said that water scarcity is the biggest challenge that the modern-day world has had faced.

Rain water harvesting is the most feasible remedy to address water scarcity, he added.

On the occasion, chief minister Sonowal released the annual report of the Sewerage Board.

Chairman of Sewerage Board Numal Momin and its managing director Ranjit Hazarika also spoke on the occasion.