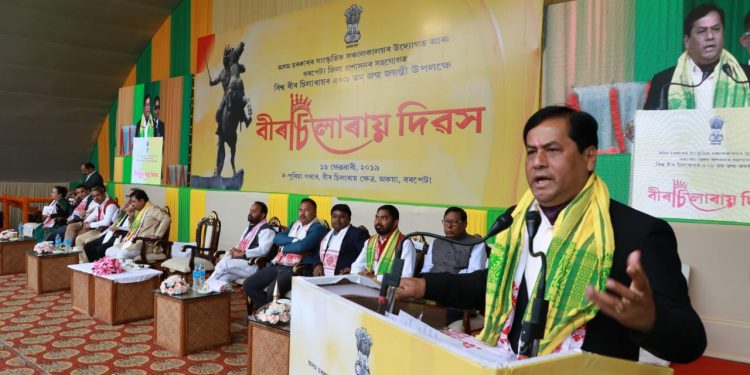 Assam chief minister Sarbananda Sonowal urged the youth of the State to follow the ideals of legendary warrior Bir Chilarai to work with passion and hard work to take Assam forward.

The chief minister made this call while taking part at the 509th birth anniversary celebration of Bir Chilarai at Akaya in Barpeta district on Tuesday. The programme was organized by the Cultural Affairs Department, Government of Assam in association with Barpeta district administration.

“Bir Chilarai was an epitome of great courage, skill and hard work. He displayed exemplary skill and astuteness in the battle fields. He was also a great admirer of art and literature, science and culture. The youth of the State must follow his footsteps to play an active role in the development narrative of the State,” chief minister Sonowal said.

Stating that there is no alternative to hard work for excellence and success in life, the chief minister observed that all the legendary heroes epitomized hard work and dedication.

He moreover said that spiritual gurus like Srimanta Sankardev and Madhabdev also espoused the value of hard work and impressed upon the youth to indulge in hard work in every sphere of their activities.

Sonowal at the same time also urged parents and teachers to made the young generation abreast with the valour and dedication of legendary personalities like Chilarai and Lachit Borphukan so that they could draw inspiration from them.

Further saying that the Act East Policy has proved to be a major catalyst in the growth trajectory of the state, Sonowal said that as an offshoot of this policy, Assam is today well poised to reap huge dividend from better connectivity and relations with the ten ASEAN and three BBN nations.

The chief minister also informed that the State Government has already taken up plethora of projects such as construction of a cultural complex in the name of Bir Chilarai, preservation of Gohain Kamal road, guest house at Guwahati and measures for preserving the legacy of former chief minister Sarat Chandra Singha in a bid to take forward the rich heritage and contributions of the Koch Rajbongshi community.

He also announced to provide financial assistance of Rs 25 lakh for preservation of Akaya Satra established by Mahapurush Madhabdev and Rs 10 lakh for construction of Chilarai Bhawan at Doising.

Former president of Darrang Sahitya Sabha Dr Amarendra Narayan Dev and MLA of Sarbhog LAC Ranjeet Kumar Dass who is also the president of the celebration committee delivered speech on the occasion.