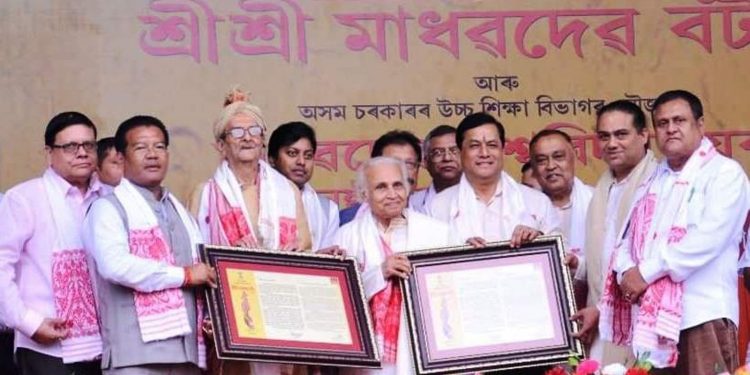 Assam Chief Minister Sarbananda Sonowal on Monday presented the Madhabdev Award for 2016 and 2019.

The award carries a sarai, a certificate of appreciation, an angabastra and a cash prize of Rs 3 lakh.

Speaking at the programme, the CM said both the awardees have made tremendous contributions towards the socio-cultural development of the state and the young generation must draw inspirations from them to take the society forward.

Strong intellectual faculty and activity were paramount for holistic development of an area and spreading the light of education could be vital to take the society on the right track, he said.

Sonowal also urged the people of the state to make Madhab Dev University a world class centre of excellence and asserted that students of this university must bring laurels to their institution by honing skills and expressing their talents.

He said the north bank of Brahmaputra river had always been very advanced in social, cultural and spiritual spheres.

Sonowal said the present state government is focusing on rapid infrastructure development in the district to take the region forward.

Connectivity and transportation systems were also being developed in all corners of the state taking advantage of Prime Minister Narendra Modi’s Act East Policy thrust, he said.

Drive against superstition and wrong notions through scientific temperament, combat against drugs menace, water conservation and cleanliness drive were some other talking points during the chief minster’s speech.