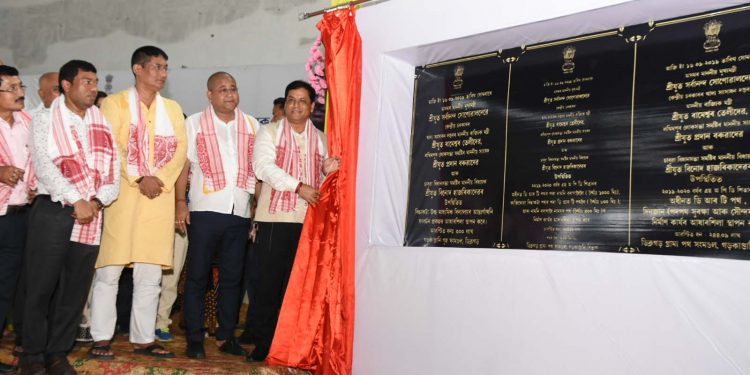 Assam CM Sarbananda Sonowal unveiling a plaque to mark the laying of foundation stone for various developmental works at Bindhakata under Chabua LAC in Dibrugarh district on Monday.

Assam Chief Minister Sarbananda Sonowal said the government of Assam is working with the Prime Minister’s vision of Sabka Sath, Sabka Vikash and Sabka Viswas to ensure all-round development of the people of the state.

The Chief Minister said this while laying foundation for various development initiatives at Bindhakata under Chabua Legislative Assembly Constituency (LAC) in Dibrugarh district on Monday.

The development projects for which the Chief Minister laid foundation include augmentation of infrastructure of Bindhakata High School, improvement and beautification of DRT road, Dinjan and three other rural roads measuring 2.2 K.M.

Speaking on the occasion the Chief Minister said that the Union government under the leadership of Prime Minister Narendra Modi since 2014 has been unleashing transformation in every sphere of public life in the country.

Inspired by this, the State government is also putting in all-out efforts to bring about development in every look and corner of the state.

In this regard the Chief Minister said in Chabua LAC alone, the State government has spent around Rs 150 crore in various development works and welfare schemes.

Recalling his school day memories in Bindhakata High School, the CM urged the teachers and parents of the area to imbibe good moral values in their children and inspired them to study hard.

He also made fervent appeal to all sections of the people to promote scientific temperament and fight against superstition and social evils.