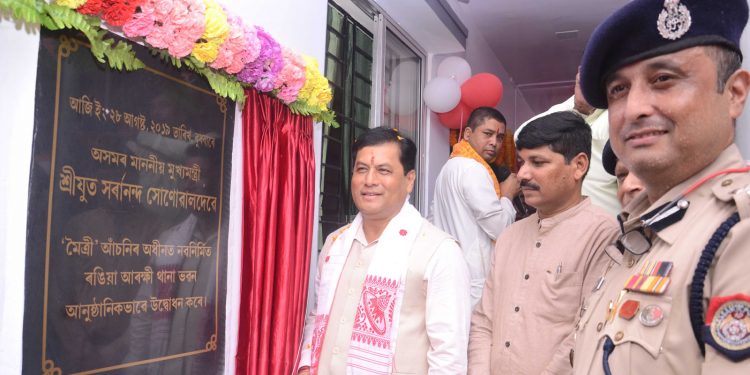 Assam Chief Minister Sarbananda Sonowal on Wednesday dedicated the Rangia Police Station to the service of the people during a function at the police station in Rangia.

The Rangia Police Station, which was set up during pre-independence period, has been upgraded under MOITRI (Mission for Overall Improvement of Thana for Responsive Image) scheme.

Assam government has adopted MOITRI scheme to make the police stations people friendly so that 70,000 police forces can imbibe people friendly and responsive approach to instil a sense of security among the people, said Sonowal.

Sonowal said the State government has adopted a three-pronged approach for the development of the State in different fields namely education, culture and sports.

His government has also drawn an exhaustive roadmap for the development of education culture and sports in order to channelize the vibrant human resources into meaningful dimension.

Giving a background of MOITRI, Chief Minister Sonowal said the scheme is credited to Prime Minister Narendra Modi’s direction which he gave in 2015 during the conference of the DGPs at Assam Administrative Staff College in Guwahati.

He said the blueprint of the development of all the police stations of the State under MOITRI is a part of executing Prime Minister Modi’s smart police concept.

On the occasion, the Sonowal also called upon the people to take a pledge for the plantation of saplings to increase green cover of the State.

He also urged the people to avoid the single use plastic bags to achieve the State government’s avowed agenda of zero pollution.

It may be noted that Chief Minister Sonowal before inaugurating Rangia Police Station participated in a plantation drive in the premises of the police station.

He also asked DGP Kuladhar Saikia to pass an order to start plantation drive in all police stations of the State.

He also said a large water treatment plant will be set up along the bank of River Borolia for Rangia, the foundation of which will be set up very shortly.

He also said that for the socio-economic development of the farmers, his government has taken a series of steps like Mukhymantrir Krishi Sa-SajuliYojna, Chief Minister’s Samagra Gramya Yojna and Ghare Ghare Pukhuri Ghare Ghare Maas to achieve doubling of farmers’ income by 2022.