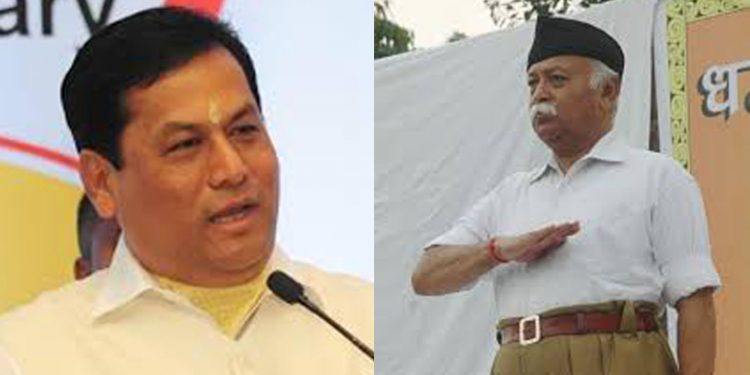 Assam chief minister Sarbananda Sonowal, who attended the concluding function of Poshan Abhiyan at Silchar, said he would seek blessings of RSS chief Mohan Bhagwat in the town on Saturday.

Rashtriya Swayamsevak Sangh (RSS) chief Mohan Bhagwat arrived at Silchar in Cachar district of the Barak Valley on Friday on a three-day tour.

Sonowal, speaking to the journalists on the sidelines of the concluding function of the the month-long Poshan Abhiyan at Silchar’s police parade ground, said, “Mohon Bhagwatji, the RSS chief, is a very senior and respected leader and I would seek his blessings when I meet him this evening.”

Chief minister Sonowal arrived at Silchar from Guwahati by an India Air Force (IAF) plane three-and-half-hours later than his scheduled programme of the Poshan Abhiyan.

Upon arrival, the CM first fed the new-born kids and their mothers.

He also blessed the kids to remain healthy and advised the mothers to maintain a nutritional diet both for their infants as well as themselves.

Speaking on this occasion, Sonowal, said, “Assam has come leaps and bounds in terms of taking forward this Poshan Abhiyan, which is a dream project of Prime Minister Narendra Modi, who wants to erase malnutrition from India by 2022.”

“Last year, only 36 lakhs of households were touched in our state, but this year, the social welfare department has been able to take that figure to one crore and seventy lakhs for which they deserve a lot of appreciation,” said Sonowal.

The CM added, “Not only the Prime Minister of India is pressing for a healthy and fit India, we too in the state of Assam need to do our bit to completely wipe out infant mortality rate and female mortality rate which I have learnt are very high in Cachar district.”

Social welfare minister Pramila Rani Brahma, speaking to Northeast Now said, “The Prime Minister of India has made it loud and clear that none of the mothers should give birth to a crippled child or physically disabled one due to malnutrition.”

“Every district in Assam has done their part. They have taken out rath yatras too, but we have not yet conducted any census to find out the figures of our mission’s reach,” said Pramila Rani Brahma.

Before concluding the programme, the mascot for ‘Beti Bachao Beti Padao’ named as ‘Misti’ was unveiled by chief minister Sonowal in presence of other senior BJP leaders of Barak Valley.

Cash prizes and mementos for the contests held for ‘Beti Bachao Beti Padao’ campaign started by the district administration of Cachar were also distributed by the CM among the winners.