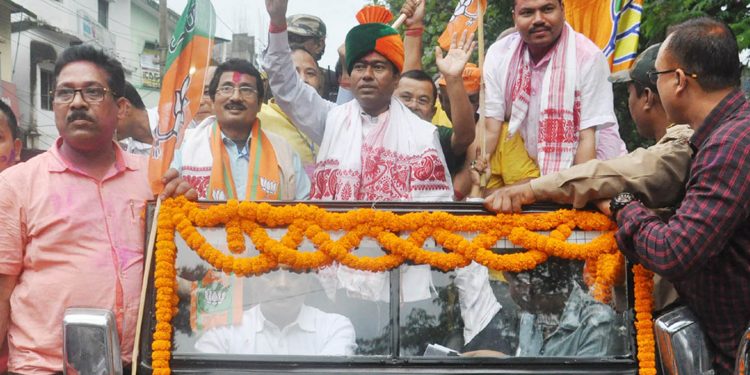 Earlier, Dibrugarh Lok Sabha seat was considered as a Congress bastion but since 2014 election changed the trend and opened floodgates for the BJP.

Even before the announcement of the election results, the BJP workers started celebrating with colours and bursting crackers.

The rain could dampen the spirit of the women BJP workers because they started dancing in Bihu tune.

“Today we are happy because we voted for ‘Modiji’, who has made our nation proud by taking bold step against the terrorists. No leaders can match with Modiji because he is one of the visionary leaders and he will work for the country’s development,” said Parag Dutta, a young BJP worker.

“In the last five years, Modiji has done hard work for development. We are sure that in the coming five years, he will work for the all-round development of the society,” added Dutta.

BJP candidate Teli was sure of his win on the ground that many developmental schemes have already touched the tea tribe families before the election.

Teli has thanked the voters, well-wishers, party workers and supporters for his win.

Teli also said, “During our campaign, we were sure that I will get three lakh votes and people showered their blessings on me through their votes. This is the win of development and our hard work in the last five years.”

On the other hand, Congress camp looked deserted as the workers were dissatisfied with the results.

The entire Congress camp in Dibrugarh was shocked with the result.

“Modiji has given us everything and he cares for us and we liked his leadership. He is a strong and capable leader who can give a strong leadership. Rameswar Teli is also a strong and dynamic leader, who has worked for us and we are sure that in coming days he will bring in lots of schemes for us,” said Bharati Mura, a women BJP supporter.