Assam: Biswanath to host first film festival from August 8 next

The first Biswanath Film Festival, 2019 is being organized from August 8 to 12 next in Biswanath district of Assam. 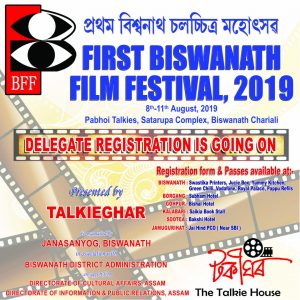 The film festival will be held at the Pabhoi Talkies of Satarupra Complex in Biswanath Chariali.

The festival is being presented by Talkie Ghar.

The festival is co-organized by Biswanath district information and public relations in association with Biswanth district administration.

Meanwhile, delegates registration is going on while registration forms and passes are also available at Bakshi Hotel in Sootea.

The five day festival will showcase 13 of the best chosen movies of the State produced in the past couple of years.

The festival will screen 13 movies through 17 shows during the five-day festival.