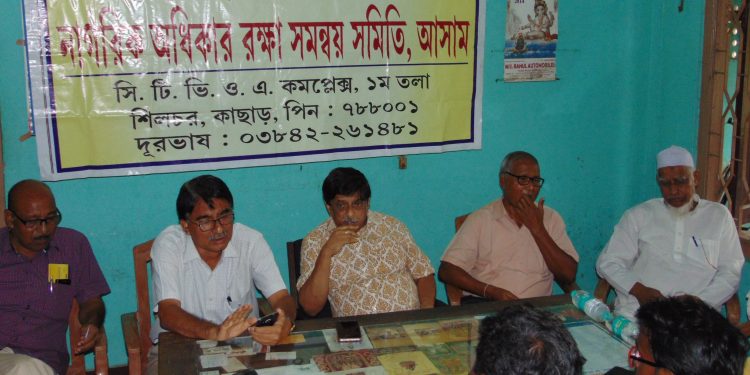 Citizens Rights Protection Coordination Committee (CRPCC) came down heavily on Assam government and NRC authorities after the publication of the final NRC list on Saturday.

It also questioned the transparency of the entire NRC exercise.

“Why did we not see the entire exercise being done transparently if it was carried out under the jurisdiction of the Supreme Court?” questioned CRPCC chairman Dr Tapadhir Bhattacharjee.

“Why did the residents of the people of Assam have to live under fear during the entire exercise?” he questioned further.

CRPCC is a conglomeration of over 40 civic bodies fighting for the socio-economic, religious and linguistic rights of the people in Barak Valley.

The final NRC list was published on Saturday and over 19 lakh people were left out of it.

“The biggest question now is as what happens to the 19 lakh people?” further asked Bhattacharjee.

Adding further he said, “The figure raises various doubts and it would be closely observed under international human rights.”

“The linguistic identity of the 1.9 million people has been kept under the wraps,” the CRPCC chairman said.

He further asserted that any person who has his/her ancestral roots in India is an Indian and at any cost.

“Such a person can never be considered as a foreigner,” he said.

CRPCC secretary Arunangshu Bhattacharjee, echoing Bhattacharjee, said, “The only place left for these 1.9 million people to prove their citizenship is the Foreigners’ Tribunals.”

“Our demand is that the government should bear the entire cost of the process,” he added.