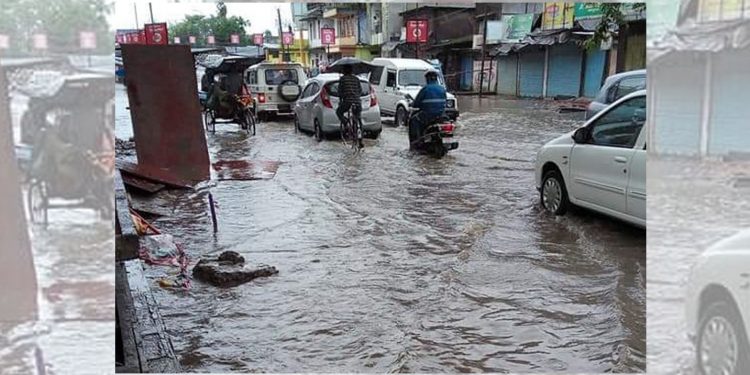 The residents of Dibrugarh took to the social media for venting their anger against the district administration for failing to tackle the waterlogging problem of Dibrugarh town.

Some of the residents slammed the administration for lack of drainage system in the town.

Waterlogging has been a serious problem for the residents of Upper Assam’s Dibrugarh town.

Last night’s rain waterlogged some of the major roads of Dibrugarh.

Every year, the people have to suffer due to the waterlogging problem in Dibrugarh.

For the past few years, the people continue to face harrowing time due to waterlogging in the monsoon season.

“There is no proper drainage system in Dibrugarh. The Dibrugarh Muncipal Board (DMB) has failed to clear the clogged drain,” said Nandan Dasgupta, a resident of Dibrugarh town.

“Waterlogging has become a serious problem for the residents of Dibrugarh owing to unplanned drains. The construction of drains has been going on and is not yet completed,” Dasgupta added.

However, the district administration has taken up some initiatives to solve the waterlogging problem, but the citizens are still skeptical about its success.

A total of 22 wards under Dibrugarh Municipal Board (DMB) were reeling under rain waters for the last two days.

Vikash Kumar, a lawyer by profession and member of the Dibrugarh Bar Association, posted on the social networking site facebook, “In one day of rain, waterlogged around the city. This is only due to the blockage of main big drain and also due to blockage of road by footpath construction materials.”

He questioned, “Is there any need of increasing the height of footpath without clearing it properly?”

He said the “government should first clean the drain”.

The prime reason of waterlogging in the town has been identified as the non-completion of the 9.5-km long Dibrugarh Town Protection (DTP) drain, which is the principal stormwater drain of the town.

Work on complete renovation of the drain was taken up in June, 2014 under an Asian Development Bank (ADB) project at a cost of Rs 169.89 crore.

However, even before 20 per cent of the work could be completed, Corsan Corviam Construction, the Spanish company, which won the tender, abruptly left the project in November 2017 after its parent organisation in Madrid filed for bankruptcy.

Since then, the project has remained stuck in limbo.