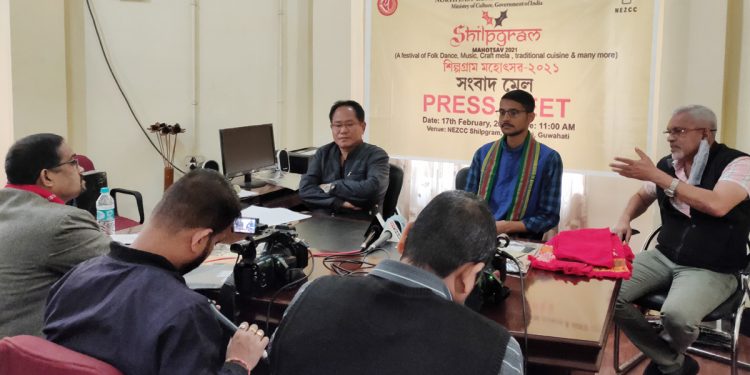 A view of the press conference on Shilpgram Mahotsav 2021.

The Shilpgram Mahotsav 2021 will be held at Shilpgram Complex in Guwahati from February 18-21, 2021.

Shilpgram Mahotsav is organized every year to mark the establishment of the Shilpgram.

The NEZCC Shilpgram at Panjabari in Guwahati was established under the Union culture ministry and it was inaugurated by then Prime Minister Dr. Manmohan Singh on January 17, 2006.

The NEZCC has invited artistes and craftsperson from all the Northeastern states to the Shilpgram Mahotsav 2021.

Local cultural troupes and popular singers from Assam are also expected to take part in the event.

To avoid large gathering of artistes at the complex as per Covid19 SOPs, the cultural troupes are divided into two groups.

“In the first two days of the programme, cultural troupes from Arunachal Pradesh, Manipur, Meghalaya and Mizoram will participate and in the last two days, Nagaland, Sikkim and Tripura will present their colourful folk dances and songs,” officer-in-charge of Shilpgram Oliver T Pongen told reporters.

Local groups from Assam will participate in all the 4 days.

“Exhibition-cum-sale of handloom and handicrafts and traditional food will also be held in all the four days,” Pongen added.

One of the attractions of the Shilpgram Mahotsav 2021 is the folk dance competition of the local groups.

The folk dance competition will be held in the first three days and the winners (first, second and third) will perform during the closing ceremony.