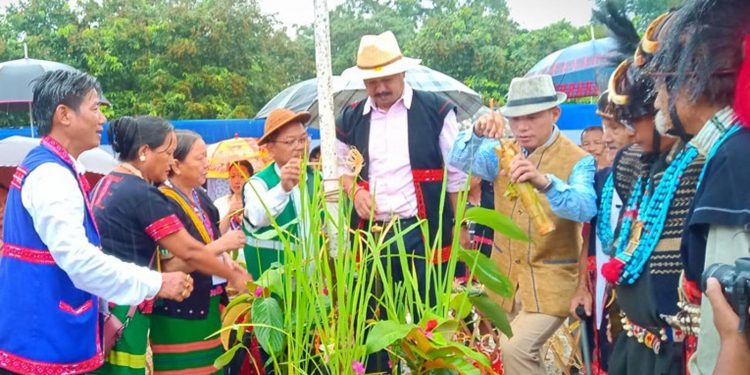 A view of the Solung Festival celebration at Pasighat. Image credit - Northeast Now

The four-day long celebrations of the 53rd Central Solung Festival of the Adi community began at the Giidi Notko in Pasighat of Arunachal Pradesh with traditional fervour and zeal on Monday.

“Solung, the socio-cultural festival of the Adi community is also an occasion to showcase and share our rich cultural heritage, folk dances and songs, costumes and ethnic cuisines with others,” said MLA Kaling Moyong.

Moyong attended the inaugural function as the chief guest.

Moyong said, “Let us extend our traditional hospitality to the visiting players, team members and dignitaries who are here to witness and participated in the Senior Women National Football Championship and help them experience our rich tradition and culture.”

Tanw Supun Dukun general secretary Prof Pura Tago in his speech as the guest of honor advocated for development of the approved common language for the Abo Tani tribes.

Tago also lauded the Adi community for their pioneering roles and contribution in various fields, particularly in the field of education and culture.

“We are indebted as whole to the Adi community,” he said while referring to pioneers of the community, who played the role of torchbearers in the socio-economic growth of the State.

Tago further called for promotion of more cultural exchanges and harmonious growth of the various communities of the State and the nation in general.

Earlier, Festival Celebration Committee president Mongol Gao highlighted the collective efforts made by all to ensure successful celebration of the festival and the need for construction of permanent multipurpose hall at Giidi Notko.