Arunachal University of Studies: A shining academic institution of Northeast

AUS enjoys the rare distinction of being the “Extreme North Eastern University of India”, and also the first university to witness sunrise in the country. 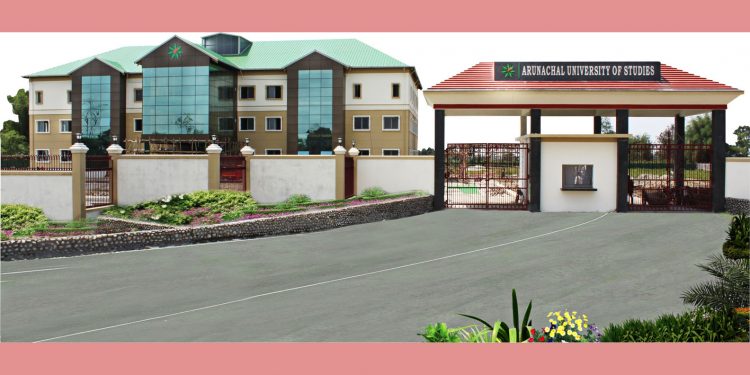 North East in general and eastern Arunachal Pradesh and Assam in particular lacked an institution of higher education for long. The students of this region had to go outside for advanced studies due to the absence of a quality university in the region. In a major effort to bridge this gap, the Government of Arunachal Pradesh established the Arunachal University of Studies (AUS) in May 2012 through an Act. The university is located at Namsai which is a gateway to a number of key districts of Arunachal and Assam.

The AUS enjoys the rare distinction of being the “Extreme North Eastern University of India”, and also the first university to witness sunrise in the country. The ideal location of the university against the backdrop of the serene beauty of Namsai and its surrounding areas has made it a perfect centre of learning. With state of art infrastructure having all modern facilities and amenities and a highly competent faculty, the university is poised to emerge as one of the best universities of India.

The establishment of the AUS should be seen in a broader perspective. It is a bold initiative taking into consideration the present and future needs of the local youth. The academic programmes of the university have been carefully crafted after evaluating the union government’s domestic as well as foreign policies. This has been done to train the youth to cope with the challenges resulting from globalisation and to make them conscious about the role of India in the New International Economic Order (NIEO) and understand various links between Northeast and South East Asia and beyond.

The AUS is relentlessly engaged to achieve the motto of excellence and “education with a difference”. The university is fully committed to provide education by offering unparalleled exposure to its students to develop into holistic human beings and citizens who can contribute to the nation building efforts.

The AUS always encourages development of knowledge, and its application to government, industry, commerce and the community. Moreover, the university encourages and provides facilities for pursuing Doctor of Philosophy (PhD). The university is fully recognised by the University Grants Commission (UGC). It is also a member of Association of Indian Universities (AIU). The certificates issued by the AUS are globally accepted.

The AUS has also applied with Pharmacy Council of India for D Pharma and B Pharma courses for the session 2019-20. Moreover, this university has been approved by Bar Council of India (BCI) for conducting education programmes and National Council for Teachers’ Education (NCTE) for conducting teacher education programmes. In another significant development, a peer team of National Assessment and Accreditation Council (NAAC) visited the university from October 29 to 31, 2018.

In its bid to develop research faculty, the AUS encourages and provides facilities for pursuing PhD. The university also seeks to introduce its own journal where papers of PhD scholars and faculty members shall be published. The AUS is organising 3rd Convocation Ceremony on February 16, 2019. It may be added that Arunachal’s first woman mountaineer to reach the Mount Everest, Anshu Jamsenpa, was conferred with D.Litt during the 2nd Convocation ceremony held on January 31, 2018.

The AUS is dedicated to imparting quality education and tries to train unemployed youth with best of expertise in respective subject areas in order to make employable with skill levels. Since the very beginning, the university has achieved several laurels in the field of quality education and has received appreciations from different sections, including eminent personalities and organisations.

The AUS is quite dynamic, innovative in its endeavours. While formulating its academic programmes, the university attempts to factor them in the union government’s domestic as well as foreign policies. The university has been actively pursuing the current National Democratic Alliance (NDA) government’s “Act East” policy. The AUS is collaborating with the leading universities and institutions of South East Asia in important areas of research, science and technology, and through student and faculty exchange programmes.

In this regard, the AUS has signed Memorandum of Understanding (MoU) with two major universities of Thailand. On July 18, 2017, the AUS signed Agreement of Cooperation with Chiang Mai University of northern Thailand. Another MoU was inked on October 9, 2017 between AUS and Majeo University of Thailand. Furthermore, the AUS is in advanced stage of talks with National University of Laos for collaboration in the fields of Agriculture Science, Medical Science and Architecture.

The role of the AUS assumes greater significance in the context of the proposed East-West Industrial Corridor Highway. The corridor project will be implemented in two phases. Under Phase II, a 100km-long highway will be built from Mahadevpur to Kanubari. Once the corridor becomes operational, it will bring about a sea change in Arunachal’s economy especially in areas like tea and food processing, bamboo and tourism. In such an evolving scenario, the university’s several departments, particularly Commerce and Management, and Agriculture will play a pivotal role. The AUS could provide agricultural scientists and corporate managers for running agro-based industries and various commercial enterprises that will be set up along the corridor.

In addition to fulfil academic requirements, the AUS gives special attention to the development of personality among students. Innumerable programmes are organised to sharpen co-curricular and extra-curricular skills of the student. The university continuously tries to inculcate spirit of sportsmanship, responsibility for society and nation and sharing of resources for growth. The AUS is contributing immensely to the spread of knowledge and nation building activities. This is the first attempt to build a state of art university in a remote part of North East. All such efforts make the AUS an exceptional centre of learning, which is second to none in North East.

Dr Rupak Bhattacharjee is an Assistant Professor in the Department of Political Science,  Arunachal University of Studies, Namsai. He can be reached at [email protected]com