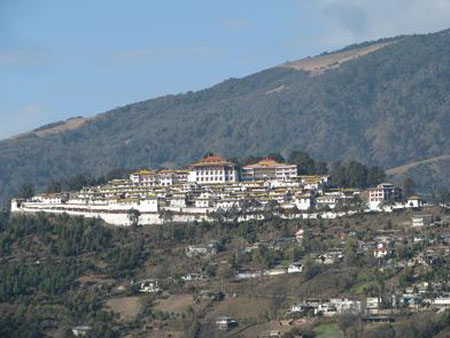 In another major blunder, the flagship promotion handle of the Tourism Ministry ‘Incredible India’ states that the Tawang Monastary was built in 1980-81! 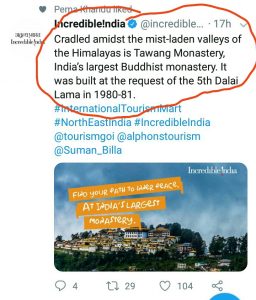 ‘Cradled amidst the mist-laden valleys of the Himalayas is Tawang Monastery, India’s largest Buddhist monastery. It was built at the request of the 5th Dalai Lama in 1980-81.’

But in reality, the Tawang Monastery was built in 1680-81, exactly three centuries ago than the year mentioned by the Bharatiya Janata Party government at the Centre.

The Tawang Monastery, located in the tiny township of Tawang in Arunachal Pradesh, is the largest monastery in India and second largest in the world after the Potala Palace in Lhasa, Tibet.

It is situated in the valley of the Tawang River, near the small town of the same name in Arunachal Pradesh, in close proximity to the Tibetan and Bhutanese border.

Tawang Monastery is known in Tibetan as Gaden Namgyal Lhatse, which means ‘celestial paradise in a clear night’.

It was founded by Merak Lama Lodre Gyatso in 1680-1681 in accordance with the wishes of the fifth Dalai Lama, Ngawang Lobsang Gyatso.

It belongs to the Gelug school of Mahayana Buddhism and had a religious association with Drepung Monastery of Lhasa, which continued during the period of British rule.

The monastery is three stories high. It is enclosed by a 925 feet long compound wall. Within the complex there are 65 residential buildings. The library of the monastery has valuable old scriptures, mainly Kangyur and Tengyur.