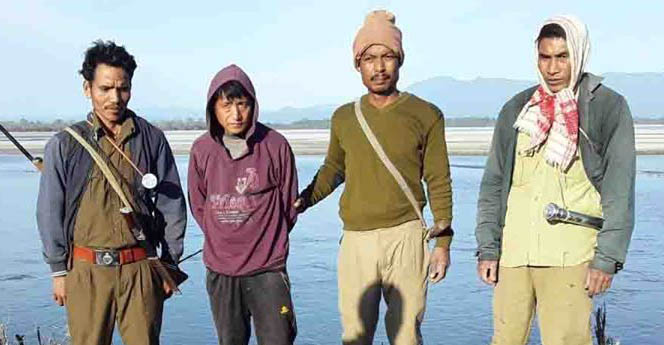 The hunter was nabbed following an intensive operation at Sibiyamukh range.

The foresters led by Sibiyamukh Range officer Domek Koyu nabbed Sanjoy Litin, a native of Ngorlung village in East Siang on the spot and seized a carcass of a female wild boar and one 12 Bore SBBL gun used in hunting.

Three other poachers accompanied by Sanjoy managed to escape taking advantage of darkness.

They intensified operation and intercepted the wildlife poachers at Balun area.

Officials say that three absconding poachers have been identified as Mesu Mize of Oyan village Kale Thapa of Pame, and Jongai of Jampani in East Siang district.

A case has been registered under sections- 428/34 IPC R/W Section 51 of Wildlife Protection Act and Section 25/27 Arms Act in Pasighat Police Station in this regard.

“Arrested Sanjoy has admitted his offense and affirmed that he earlier made two times illegal entry into the sanctuary for hunting”, DFO Taga informed.

The DFO lamented hunting and poaching on wildlife, which is a traditional practice of the local tribal communities of the state has already taken large toll on wildlife population.

Consequently many rare and endangered species has become extinct so far.

The sanctuary is considered as key factor for restoring ecological balance in the region, besides providing safety to the wild animals of Poba Reserve Forest in Dhemaji district of Assam.