The welcome gate at the Pangsau Pass Winter Festival

Road connects. Passage helps flow. Communication builds a bond. Trade sustains alliance. Cultural exchange strengthens a bond. Would it be a wonder if all these life abetting units form the themes of a festival which is celebrated for sustaining a bond? Probably no. For the answer we would surely get in Pangsau Pass Winter Festival, a three-day extravaganza which is pompously celebrated on a historic road, trades, and diverse cultures of two ethnically rich countries.

Started in 2007, Pangsau Pass Winter Festival is a three-day fiesta to bring the two nations— India and Myanmar— together. It is a celebration to keep alive the connection built by the yesteryear’s great administrators of both the nations. The famed Pangsau Pass connects Nampong, the last town of the eastern part of Aru 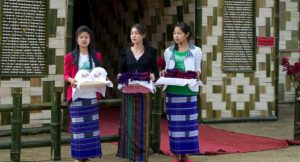 nachal Pradesh and Pangsau, a quaint village of Myanmar closest to the Stilwell road. 3727-feet high Pangsau Pass lies on the crest of the Patkai Hills on the India-Myanmar border. The pass offers one of the easiest routes to Myanmar from Ledo, Lekhapani, Jagun of Assam through Jairampur and Nampong of Arunachal Pradesh. The road from Ledo onwards is known as the historic Stilwell road which was built by General Joseph Stilwell of the US Army during World War II that links Northeast India with the Myanmar road which runs from Myanmar to China. This route is also believed to be the route used by the Ahom to invade Assam on the eve of the 13th century.

The festival is held in the picturesque locale of Nampong during the 3rd week of January every year generally. It lasts for three days. During these three days, the area turns into a global village, as it becomes a free access zone for the people from both the countries without any social and political barriers.

The three-day extravaganza is full of events that showcase the diverse cultures of Northeast India and Myanmar that include folk songs, folk dances, arts, crafts, ethnic foods, traditional sports, and many more. It shows how two neighboring nations could be drawn nearer through the exploration of the cultural grandeur of the diverse ethnicity that these nations take pride in. Thus amidst the enchanting environmental settings of Nampong, the festival uncovered the multi-layered contours and the strange customs of the Tangsa community (of Myanmar) and the rich colorful cultures, traditions, and art of Arunachal Pradesh particularly. As dance forms are the aesthetic demonstration of a culture, performance of dances is one of the chief eye-catching events of the festival. And the dances that usually enthrall the visitors are Tangsa Rongrand War Dance, Lungchang Dance, Wancho Dance, Bihu Dance, and the Bamboo Dance etc.

The festival has a special room for the traders from Myanmar. The goods that they put on sale are garments, toiletry, cosmetics, porcelain, small gadgets and packaged food items. A particular attraction of this make-shift market is knives and ceremonial swords. In this two-nation joint fest, however, currency is not a problem, for rupees are always happily accepted as the means of exchange by both sides. Again, in this assemblage of multi-ethnicity, communication does not seem to be a barrier as plenty of gesticulation and intonation can be used to overcome the apparent obstacle the visitors do face. This carnival also brings together artisans, who display enigmatic and exotic arts and crafts from both Arunachal Pradesh and Myanmar. Aside from the ethereal articles that they exhibit and the value that they get in return of selling them, what charms everyone is their warm hospitality that compels the travelers to take the products back home as a memento despite their eye-rolling prices. Their full-of-heart nature and high-spirited countenance are always able to draw the curious outsiders to unearth the gems they have in the treasure-trove of their culture and tradition.There is more to this magnificent festival. This three-day extravaganza promises to surprise the visitors in many ways.

Thus besides wandering around the cultural elements on display, the travelers can also cross over to visit World War II Cemetery, border bazaar, The Lake of No Return, and the nearby villages of Myanmar. The Lake of No Return is a historic lake into which planes crashed during World War II. Its shores are serenely beautiful and utterly peaceful, though now many houses have been built surrounding it that, for some, has added to the beauty of this lake, but for many green activists, has taken away the serenity of this historic lake. 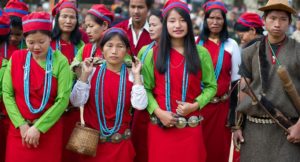 As ‘crossing over’ is a part of the festival, military presence or any kind of military check-up is relaxed on either side during this three-day fest. This crossing over or pass-free entry to Myanmar is also applicable on 10, 20, and 30 of every month. Thus the visitors who miss the festival can make a plan to visit Pangsau Pass to have a brief sojourn upon this eco-friendly territory amidst the endless greenery, the plummeting rivulets nearby the historic Stilwell Road, the dense foliage, ethnic cuisines, and the sincerity and humility of the local rustic people.

In this trouble-torn world where conflicts between nations are common-place for this or that issue, festivals like Pangsau Pass Winter Festival seem to have a great relevance in sustaining the bond that already exists and augmenting it to tie the others that lie beyond.