Keep Arunachal away from Naga peace deal: AAPSU to Centre 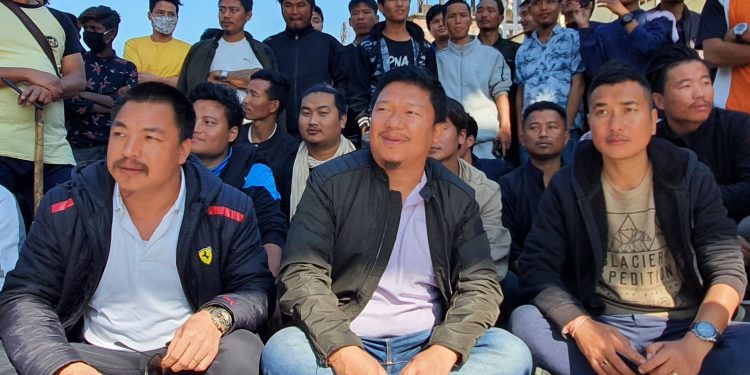 The All Arunachal Pradesh Students Union (AAPSU) has once again appealed to the Centre to keep Arunachal Pradesh away from any kind of ‘territorial changes’ or ‘administrative and political interventions’ while finding a solution to the age-old Naga political problem.

Reacting to media reports where the Centre has decided to conclude the decades-old peace talks with the NSCN (IM) and Naga National Political Groups in Nagaland by September this year, the AAPSU said “the talks should not affect Arunachal and its people in any way.”

“We are very much aware of the NSCN (IM)’s vision of Nagalim or Greater Nagaland but there are no ‘Nagas’ in Arunachal Pradesh. We have always, on record, objected to their vested interest designs. All the tribes including the Noctes, Wanchos, Tutsas, Tangsas etc inhabiting in the state are Arunachalees and Indians,” a statement from the union said.

The map of Nagalim, released by the NSCN (IM) a few years ago includes the Tirap, Changlang, Longding, Anjaw, Lohit and Namsai districts of Arunachal in it.

The successive governments, civil societies and student organisations in the state have, however, made it clear that they would not compromise on their territorial integrity.

The AAPSU said the Centre should also stand by the assurances given by its interlocutor and present Nagaland governor R N Ravi to the union.

Ravi, during his meeting with the then AAPSU team in 2015 had promised that Arunachal’s interest would not be compromised during the time of executing the final draft of the Naga Peace Accord.

The AAPSU said its present team has already submitted representations regarding the matter to President Ram Nath Kovind, former home minister Rajnath Singh besides submitting numerous representations to the state government and governor.

“We welcome the initiative taken by the successive governments in resolving the Naga issue; however, we would also like to make it clear that the indigenous people of Arunachal Pradesh will strongly oppose any attempts made to change the territorial jurisdiction of the state or any kind of administrative, political or other interventions while reaching a final solution to the decades-old insurgency problem in Nagaland,” the union said.

The AAPSU has further called upon all the legislators of the state assembly, the state’s MPs and the political parties to strongly oppose any possible attempts to alter the state’s territorial jurisdiction and administration for the proposed accord between the Government of India and NSCN (IM).