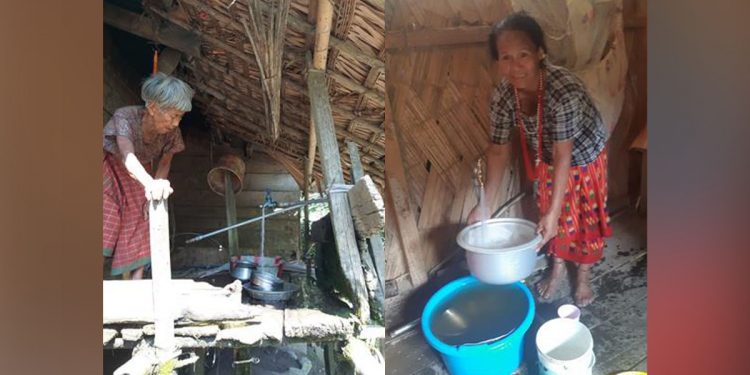 Serin, a quaint village at an altitude of 2,000 feet, nestled in the greens of Arunachal Pradesh has all the reasons to rejoice now.

Accessing this small remote village is not an easy task. One has to trek minimum one day on foot to reach Serin, which is situated in Tamen – Raga block of Kamle district in the state.

The terrain is tough here and so is the life of people. The distance between Serin village and its nearest Pucca road is 22 km.

The village is inhabited by Nyishi tribe with a total population of 130. Their happiness knows no bounds as every household is enabled with a tap connection now, ensuring potable water in their premises.

Earlier, fetching water was a time taking and arduous task especially for the elderly people of Serin village as they had to fetch water from the nearby spring sources.

But now thanks to the Serin water supply scheme, tap connections are available in every household.

The Arunachal Pradesh government has decided to provide 100 per cent tap water connections to all the households in the State by 2023 under Jal Jeevan Mission (JJM).

JJM is a flagship programme of the government, which aims to provide safe drinking water to all.

It is the vision of Prime Minister Narendra Modi to bring improvements in the lives of people of the country, especially the rural people.

The mission aims to change the lives of the people residing in the rural area.

In hilly areas, it is a huge burden on the women of the household to go and fetch water from a distance, which takes a heavy toll on their body.

To reduce their drudgery, this mission has come as a boon and aims to provide potable water to every rural household in adequate quantity and of prescribed quality on a regular and long-term basis.

The states are required to train five persons especially women in every village for use of field test kits for testing of water supplied at the local level.

It was an uphill task to implement Serin water supply project. Since the village is situated on top of the mountain, all the River Bed Materials like sand, shingles, boulders, etc., had to be collected from the rivers located far below the village.

Besides, all the bulky materials like steel, cement, pipes, etc., had to be carried by the head load from the nearest motorable road to worksite negotiating the tough terrains.

The high operation cost of the project, compounded by non-availability of skilled labourers locally increased the challenges manifold.

But the work was meticulously planned and implemented by the PHE department.

Being a hilly State, a gravity-based water supply system is used in Arunachal Pradesh, which means the force of gravity is used to move the water downhill from a source to the village.

An intake structure is built to collect the water from surface sources, which is then conveyed to the village through a pipe system.

In the olden days, water treatment plants were not usually considered due to restrictive per capita cost norms.

But now with the launch of Jal Jeevan Mission, water treatment plants are being made an integral part of schemes to provide potable water of prescribed quality.

Post-treatment, water is collected in a clear water reservoir built above the village, from where water is distributed to FHTCs in the village by a distribution network of pipes.

In order to facilitate equitable distribution of water, in larger villages, distribution tanks within the villages are provided.

Serin village is not a stand-alone example in the frontier state.

Dalbing, another village located at an altitude of 3,300 feet in Upper Siang District with 79 households and a population of about 380 people is an excellent example of community mobilisation.

The village belonging to Adi tribe is situated on a tabletop hillock.

Since the Jal Jeevan Mission is a decentralized, demand-driven and community-managed water supply scheme, the natives of Dalbing village made community contribution in the form of labour.

Similar works have been done in Upper Karko village which is a border block having an international boundary.

During the execution of work to provide FHTCs, the pipe and other construction materials were carried by the villagers.

They had also assisted PHED in plumbing works.

Another village Pumao located at an altitude of about 3,900 feet in Longding District, which is the easternmost district of Arunachal Pradesh had toilets made under Swachh Bharat Mission, but villagers were reluctant to use them due to non- availability of running water supply.

Now they are happily using the toilets as well after the provision of water in their households.

The implementation of the Jal Jeevan Mission in these tough terrains and high altitude is a challenging task.

Impediments increase with the harsh climatic conditions and poor connectivity.

Equally challenging is to instil behavioural change in the villagers who are very reluctant to shun their beliefs and lifestyle.

But the success stories of these villages are proof of the better future envisioned by the Union Government to improve the lives of people especially the women.