Arunachal Pradesh Teachers’ Transfer & Posting Policy 2020 has been implemented to ensure the need-based distribution of teachers in the state: Mein 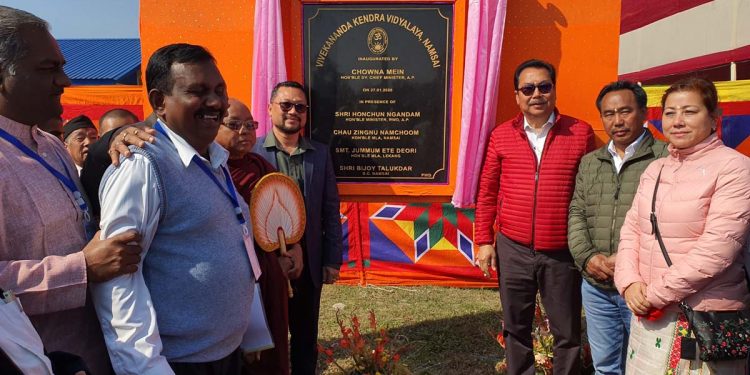 Speaking on the occasion, Mein acknowledged the contributions by Vivekananda Kendra Vidyalayas (VKVs) in Arunachal Pradesh.

He added, “VKV is one of the reputed educational institutions which cater to the educational needs across the nation.”

“It is my privilege to inaugurate the VKV at Namsai. Starting a VKV in Namsai and dedicating it to the people is indeed a cherished and deserving work that has been done by local legislator Chau Zignu Namchoom,” said Mein.

He stated the state government accords top priority to the education sector and called to ensure quality education at the grassroots level.

“Better quality education has to be taught in the base itself to provide a bright future to our students,” added Mein.

He said Arunachal Pradesh Teachers’ Transfer & Posting Policy 2020 has been implemented to ensure the need-based distribution of teachers in the state.

Mein said he is deeply concerned about the growing drug menace in the district.

He exhorted the VKV Namsai to conduct anti-drug awareness programme in the district to sensitize the students and parents so that they take up a pioneering role in creating an atmosphere where drug abusers and peddlers will have no place in society.

Mein lauded the effort of VKVs in protecting, preserving and promoting the indigenous culture and tradition in the state.

To the delight of everyone, Mein announced to appoint one Khamti language teacher in VKV, Namsai to keep the traditional values, the local dialect, and culture alive.

The deputy chief minister exhorted the students to excel in academic and other spheres, to script history through their lives.

He asked the students to resolve to do something significant, apart from excelling in studies.

Minister RWD Honchun Ngandam said Namsai is a growing district and comparatively leading in all spheres.

He called upon the students to develop self-confidence and equip themselves to take the nation to greater heights.

He urged the students to follow the philosophy and ideals of Swami Vivekananda for which he lived and worked and could be a great source of inspiration for the Youth.

MLA Namsai Namchoom also spoke and called upon all to provide support for the growth of VKV Namsai.