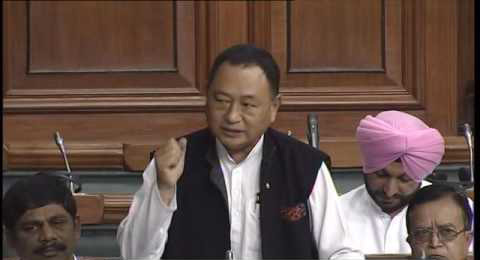 BJP and Congress MP’s have raised concerns over delay in mobile network rollout in uncovered villages of the Northeast region.

Arunachal Pradesh Congress MP Ninong Ering in a letter to the Telecom Minister Manoj Sinha, said that despite north eastern states signing MoU in January for installation of mobile towers in uncovered villages, nothing has been implemented.

“It is my earnest request to you that the connectivity on all Chinese borders is very important. As you must have witnessed during the last incursion of the Chinese in Bishing, in Tuting area of Arunachal Pradesh, the information received by the army personnel was very late. If the mobile tower had been installed in  time the incursion could have been stopped,” Ering said.

The Cabinet in 2014 had approved Comprehensive Telecom Development Plan for the north-eastern region to provide 2G mobile coverage in 8,621 uncovered villages and areas along with national highways in the North-East with an outlay of Rs 5,336.18 crore. However, the project is yet to be rolled out.

Bharti Airtel has also been entrusted to set up over 2004 mobile towers to connect about 2,128 villages in Manipur, Mizoram, Nagaland, Sikkim, Tripura, parts of Assam and national highways in north-eastern States. Besides, BSNL has been assigned to install 2,817 mobile towers to provide coverage in 4,119 uncovered villages in the region, reported the Business Standard.

When contacted, a Department of Telecom (DoT) official said that the Telecom Commission has already approved the project and the roll out has been delayed due to pending network testing on ground.

He said, “BSNL has been awarded project on the nomination basis. There have been complaints against telecom network deployed by BSNL in naxal affected states. BSNL plans to deploy same technology in North East.

“The Telecom Commission in September has desired to conduct test at the site to check if BSNL network works without any glitch in North East states before final approval is accorded.”

A BSNL official has said network in area is affected by left wing extremism (LWE) was based on specifications approved by DoT.

“The network came as relief for those areas which never had any connectivity and was appreciated by all initially. Over the years network carrying traffic capacity has reached its limit. Therefore it needs further upgrades for which DoT is considering various measures. BSNL will upgrade as soon as approvals are received,” the BSNL officer said.

The DoT officer said that BSNL vendors agreed for network test in North East at the location in mid-February.

“We are just waiting for them to get the testing done, after which the mobile tower roll out can be carried out as per BSNLs convenience,” the officer said.