Efforts would be made to turn the farm into an agro-tourist hotspot of the State, says minister 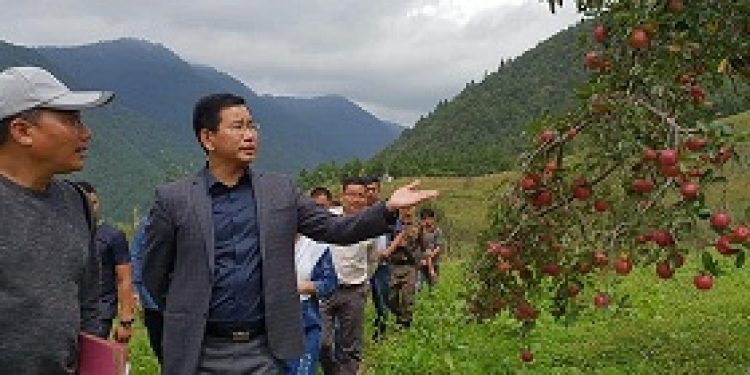 The Government-run apple orchard at Shergaon is one of the biggest in the State where more than 42 different varieties of apple are grown. Besides apple farming, the centre here also grows a variety of nuts, berries and ‘Paris polyphylla,’ popularly known as ‘Jungli Katchu’ in local term.

Dr Chai who was “delighted” to witness the farming activities being carried out in the farm asserted that efforts would be made to turn the farm into an agro-tourist hotspot of the State. Chai said the State Government under the leadership of Chief Minister Pema Khandu is laying special focus on the agriculture and horticulture sectors as it had immense potential of self-employment.

“The officers of various departments must work proactively for effective implementation of agriculture and horticulture-related schemes that have a greater potential of creating self-employment avenues,” the minister said. Chai further also called upon the youths of the area in particular and the State in general to take advantage of various agriculture and horticulture-related schemes launched by the State and the Central Government.

Responding to a memorandum submitted by the local farmers for construction of a market shed in the township so that they could sell their produce, Minister Chai assured that the same would be taken into account soon. The Horticulture Secretary, Mimum Tayeng, Agriculture Director Anong Lego, Horticulture Director J Rime, Veterinary Director NB Minto, WRD SE T Lego, local public leaders and heads of various departments accompanied the minister during his visit.

Earlier, on Monday, Minister Chai visited the Regional Sheep Breeding Farm (RSBF) in Sangti Valley and the Krishi Vigyan Kendra (KVK) and Regional Apple Nursery (RAN) in Dirang. In his interaction with the officers and officials of KVK, Chai stressed on the need to develop more market linkages so that the local farmers could sell their produce at remunerative prices. The minister also asked the KVK to organise more buyer-seller meets and come up with farmer-centric schemes and technologies. At RAN, the minister enquired about the progress of schemes being taken up by the nursery.