Sensation prevails at Upper Kobu near Assam-Arunachal boundary over brutality and inhuman torture meted out by security personnel to innocent villagers at Sivaguri village in Assam’s Dhemaji district.

The TMPK filed a complaint to the Dhemaji deputy commissioner on Monday in this regard.

In its complaint, the TMPK alleged a team of Arunachal police, accompanied by CRPF personnel, entered the village on March 12 early morning and harassed innocent villagers in the name of searching some accused.

They allegedly tortured innocent villagers including women and children in which three persons including a woman and a minor were severely hurt.

The security personnel from Arunachal Pradesh also allegedly damaged dwelling houses and other properties owned by the villagers.

The police later released three of them on Sunday. 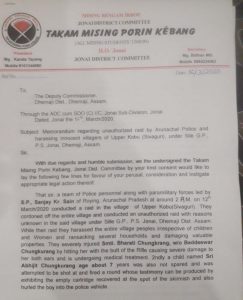 According to reports, the Arunachal Pradesh police are keeping three arrestees under custody while three other villagers have gone missing after the raid.

“They did not take help of local administration of Assam counterparts for conducting the operation,” said Saroh.

The TMPK unit-led by president Kanda Tayeng and secretary Bidhan Mili demanded the Dhemaji district administration for institution of a judicial probe into the alleged cruelty of Arunachal police.

They also demanded the authority to set up a border outpost of Assam Police Battalion at Upper Kobu to guard the Assam villages located near the inter-state boundary.