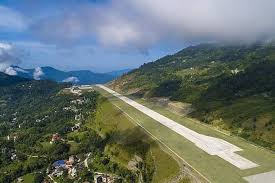 The Airports Authority of India (AAI) is going to start the construction work of Green Field Airport at Holongi in Arunachal Pradesh by February this year.

Presenting the status of progress, the AAI regional executive director informed that they are going to ‘start the first phase of work for the runway (length 2300 m for operation of A320), pavement works, watch tower, perimeter road etc by the first week of February and the tenders for the second phase of works for terminal building and other constructions is likely to be finalized in April, 2020’.

The state work agencies informed that shifting of 11 KV LT power line passing through the project site will be completed by March, 2020 and works for bulk water supply and power supply, boundary wall, four-lane approach road and other works will also commence by February.

Updating on the status of relocating the 132 KV Gohpur-Nirjuli transmission line, the POWERGRID officials said that they have already completed the detailed survey and are in the process of obtaining forest clearance for alternate routing.

The Civil Aviation minister assured all help and support from the state government to alleviate any problems that could arise and appealed to all to come together like a team to ensure early completion of the Hollongi airport project.

He said, once complete the airport will play a pivotal role in steering all around developmental activities in various sectors by providing much awaited air-connectivity to the state capital.