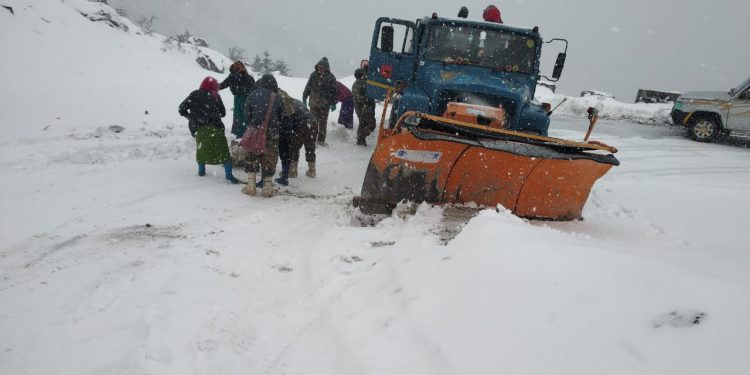 Heavy snow fall has wreaked havoc in western Arunachal Pradesh, where the officials of Border Roads Organisation are trying to clear the roads for smooth traffic movement.

The worst of the weather seem to have been at Sela Pass, and the Balipara- Chariduar -Tawang road which is located at an altitude of 4195 mtr, 13760Ft above sea level is one of the worst affected.

The cold weather conditions during the winters sets in as early as October and lasts till end of May and remains too cold with the temperature ranging from 15’ to 5’ C which  results in continuous cold breeze and intermittent rainfall/snowfall.

The road stretch for at least 20 KM length on either side of Sela Pass experiences moderate to heavy snowfall which hampers the traffic movement, most of the time.

Of late the Sela Pass has experienced extreme bad weather since the beginning of month of December.  The  average snowfall recorded around  20 KM stretch on either side of Sela Pass during this month ranged from 10 cm to 40 cm.

The Border Roads Organisation are tirelessly carrying out rescue operations and crisis management on the ground to help movement of any civil as well as army vehicle stuck on road due to skidding and thus averting long traffic jams.

The Border Roads Organisation team carrying out rescue operation 90 RCC comprises of 2 Officers, 4 JE and 20 other Ranks deployed on daily basis for snow clearance and ensuring smooth flow of traffic at Sela Pass.