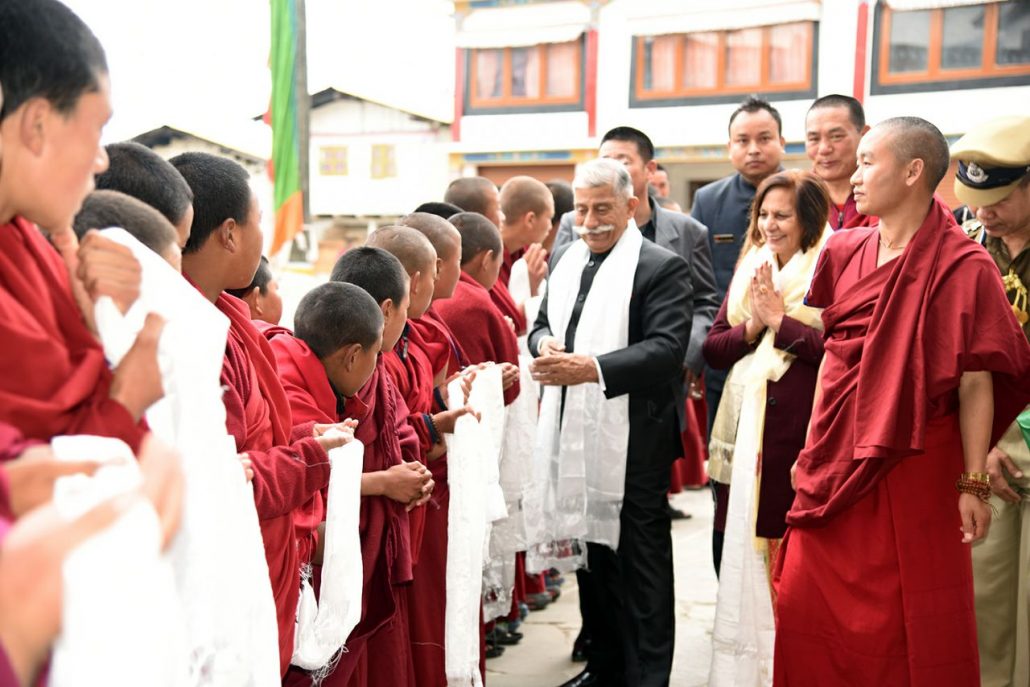 Arunachal Pradesh Governor Brig (retired) BD Mishra, who is on a three-day tour of Tawang district, reached Tawang on Thursday.

Accompanied by the First Lady of the State, Neelam Misra, the Governor started the district tour by paying obeisance at the 400-year-old Galden Namgyal Lhatse, popularly known as Tawang Monastery. Ushered around the famed 17th century monastery by the monks, the Governor visited the main prayer hall, the monastery museum and the monk quarters and interacted with the senior monks.

He was very impressed by the grandeur of the second largest and oldest monastery of Asia, which is also one of the most sought tourist destinations of the Northeastern region.

Addressing a public meeting, the Governor appealed to the people including the Lamas, Goan Burhas, Panchayat members, public leaders, Non-Governmental Organizations and government officials to participate in the development process of the State by ensuring transparency, accountability,  continuity, review and audit and if require, midterm correction.

“Every member of the society must play their role, particular our ladies,” said the Governor adding, “For a State to progress, it must have a healthy environment, literate society and empowered the women.” He emphasised that every child above the age of six must be given opportunity to be educated and must be sent to school.

The Governor, who has been keen for recruitment of youth of the State in the Indian Army, since assuming the office of the Governor, appealed to the people to motivate and encourage all able youth to join armed forces.

Informing about the ensuing vacancies, he said that the interested youth will be provided free pre-recruitment training and coaching by the Army. With home-grown soldiers in the border, the nation will be more secured, the Governor pointed.

The Governor also appealed to the local communities to review the land compensation cases. He said that it is the duty of every citizen to cooperate and facilitate in the development process. Land compensation has become a bottleneck in building roads and other essential infrastructure, the Governor said while advising the government officials and public leaders to promote the national cause and interest.

The Governor advised the people to preserve the natural environment, the flora and fauna and maintain their localities neat and clean. Such good practices and healthy habit will ensure socio-economic development of the State, through eco and religious tourism, he said. Further, he also assured to take up the clearance of Lumla-Tashigang Road with the Union Ministry of External Affairs.

A cultural presentation, showcasing the rich cultural heritage and traditions of Tawang district was presented for the visiting dignitaries. 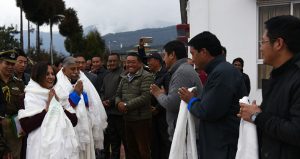 Earlier on the arrival of the Governor and the First Lady of the State at Tawang, they were accorded a tradition reception with presentation of famous Lion dance and mythological pantomime, the Aji Lhamu dance. Tawang Deputy Commissioner Er Sang Phuntsok, Superintendent of Police M Harsha Vardhan, received the Governor, who came in the scheduled Sky One Itanagar-Guwahati-Tawang flight, at the Changprong helipad in Tawang.