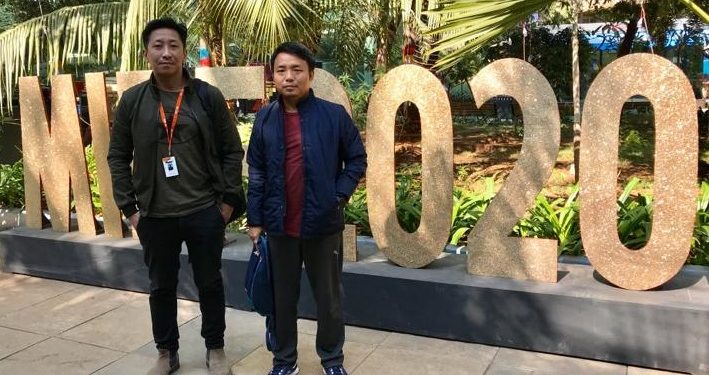 Sanju Dodum (left) and Apak Gadi during the Mumbai Festival.

A documentary film on the Memba tribe made by filmmakers from the state was screened at the 16th edition of the Mumbai International Film Festival on Friday.

The Membas of Arunachal Pradesh, a short documentary film by Apak Gadi and Sanju Dodum, was part of the ten films being screened at the ‘Films From North-East India’ section of the festival.

This is the second time in consecutive editions that Gadi and Dodum’s film is being screened. In 2018, their documentary film ‘40 years through lenses’ was screened.

The 22-minute film has been produced by the state IPR Department, and documents the life and culture of the Memba tribe.

Assembly speaker PD Sona, who is a Memba himself and was given a special screening, lauded the film and its aim.

Speaking about the film, Sona said that it was “nicely researched” and that “more such documentaries on lesser-known tribes should be made”.

“Such in-depth researched documentaries on tribes of state would help us understand many things about our culture and tradition,” Sona added.

Calling more ‘such excellent work’ to be made, he said that it will “especially be very helpful for younger generations to learn about their culture”.

Speaking after the screening of the film, Gadi said “getting a chance to tell the stories of our own people to the rest of the world in a platform like MIFF gives me an immense satisfaction”.

His co-director, Dodum, said that such platforms help filmmakers grow in their craft.

“Sometimes even when you disagree with the treatment, vision, message or aesthetics of any film/filmmaker, you still get to learn a lot about the art of filmmaking and it shapes you as a filmmaker,” he said.

“Such events are a great place for people to see and learn from others work and find unknown gems from the world of independent cinema/documentary filmmaking,” Dodum added.

The MIFF is the oldest and largest film festival for non-feature films in South Asia, which began in 1990, and is organised by the Centre’s Ministry of Information & Broadcasting’s Films Division.

The festival began on January 28 and will conclude on February 3.