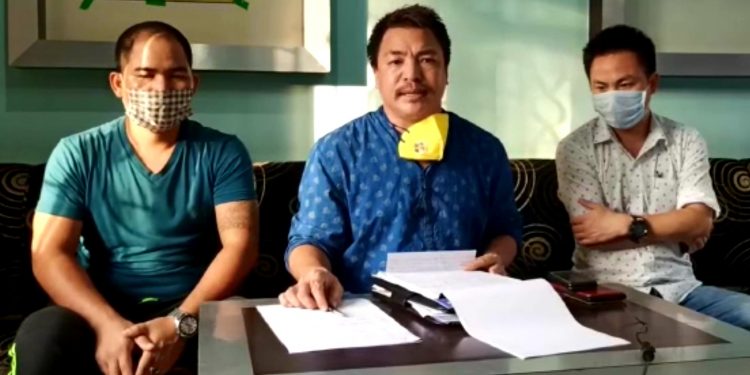 AAPSU leader said the union has been vocal in demanding testing centers in more places of the state.

The All Arunachal Pradesh Students’ Union (AAPSU) has hit out at the state government for the “non-availability of medicines used in emergencies to treat Covid-19 patients in the state.”

“The ICMR has approved certain medicines and vaccines to treat Covid-19 cases during emergencies and the same is being used by several states in the country, however, it is sad to know that our government does not have those necessary drugs and injections,” AAPSU vice president Meje Taku said in a video message on Tuesday.

Referring to the death of a 32-year-old man due to Covid-19 at the Tomo Riba Institute of Health and Medical Sciences (TRIHMS) on Monday, Taku said “instead of making the necessary medicines and injections available at the hospital, the family members of the deceased were handed a prescription and asked to search for the same in pharmacies.”

“It been almost four months since the Covid-19 pandemic entered the state and still our government is not fully prepared to tackle it. There is a shortage of personal protective equipment (PPEs) in several districts of the state while testing facilities are available only in three districts,” Taku said.

The AAPSU leader said though the union has been vocal in demanding testing centers in more places of the state, the same is yet to be looked into by the government.

Besides the capital, TruNat machines are available only in Tawang and Pasighat. Also proper procedures of testing are not being followed, Taku alleged.

The AAPSU further demanded that the government come out with a white paper on the financial condition of the state.

The union said the cost of the generic version of Covid-19 treatment drug remdesivir ‘Cipremi’ is around Rs 4000 to 5000 and even that is not available with the government.

“Besides medicines and vaccines there is a shortage of PPEs for the frontline workers while those in quarantine centers are not getting the facilities as they should. Does the government not have enough money for this? Where is all the money that has been given by the Central government and those which have been diverted through the North East Council?” Taku questioned.

He said it is the responsibility of the government to look into such matters, to procure the required medicines and vaccines instead of asking the family members of the patients to search for it.

The AAPSU said that community transmission has begun in the capital and it is the people who are coming forward and telling them about their contacts instead of the health department tracing them.

“Despite the people coming forward they are not being tested. The situation is similar in Namsai. If this continues then the state will collapse and we will all die,” Taku said while calling upon chief minister Pema Khandu to get involved in the matter.

Arunachal Pradesh has of recent been witnessing a massive spurt in the number of Covid-19 cases, especially in the Itanagar Capital Region which has 123 active cases as of July 14.

The state has 239 active cases while 145 people have recovered from the virus.

A 32-year-old businessman from Naharlagun who was suffering from acute respiratory distress syndrome and diabetes mellitus passed away on Monday, making him the third person to have died due to the virus in the state.

Health minister Alo Libang, when contacted, said that instructions have been given for the procurements of necessary medicines and vaccines and it would be made available for the public soon.

“We have already ordered the essential medicines and vaccines from Tezpur and all other shortages are being looked into. Also enough logistic support is being provided by the government,” he said.