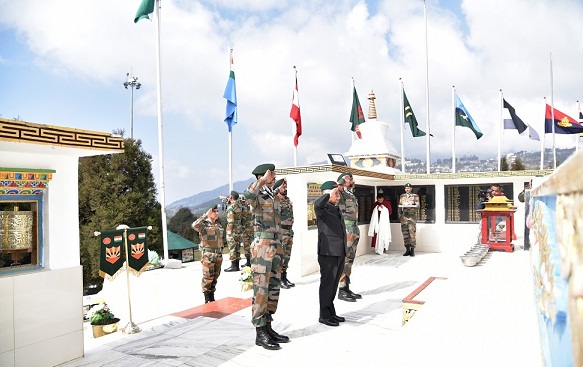 Arunachal Pradesh Governor B D Mishra paid homage to the martyrs of 1962 Indo-China War at the Tawang War Memorial on his final day of three-day maiden visit to frontier district of Tawang on Saturday.

Laying wreath at the 40 feet high Stupa War Memorial, the Governor said he salutes the great heroes of the Indian Armed Forces who laid down their lives to thwart the Chinese attack. The Governor with great respect to the martyrs wrote on the visitor’s book, “We will emulate your valour and defend our Nation as ordained by our brave hearts”.

Commander 190 Mountain Brigade Brig MP Singh accompanied the Governor and the First Lady of the state Neelam Misra around the memorial.

The Governor and the First Lady Neelam Misra also visited Urgelling Gompa and paid obeisance at the birth place of the 6th Dalai Lama. They also visited and paid their respect at Jamyang Choekorling Monastery, Changprong, near Tawang.