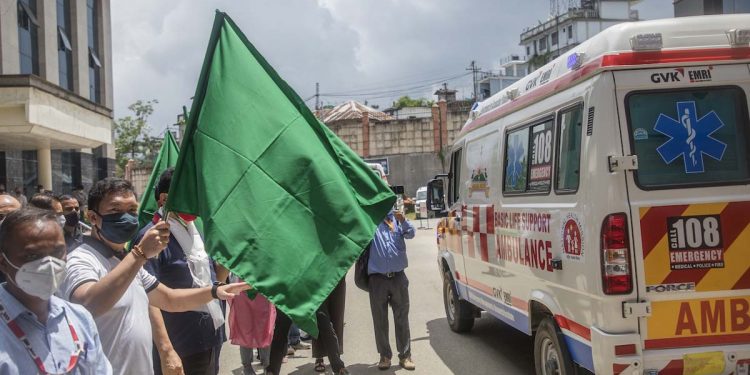 Arunachal Pradesh chief minister Pema Khandu dedicated ‘108 Emergency Response Ambulance Service’ to the people of the state in a simple ceremony at the state civil secretariat in Itanagar.

Khandu flagged off the ambulance service on Monday following a mock drill and call to the central 108 emergency call centre.

Under the service, a total of 90 ambulances will operate in the network across the state, which will be operated by GVK EMRI (Emergency Management and Research Institute) through a Centralized Call Centre on public-private partnership (PPP) mode for the state National Health Mission.

These ambulances, to be positioned at strategic health facility locations to cover all parts of the state, shall operate with 133 trained pilots, 146 emergency medical technicians and basic life support equipment.

The Dial 108 system will be operated through a central call centre, which can be called by using any type of mobile or landline phone from anywhere in the state to alert the centre of an accident or occurrence of an emergency medical situation.

The call centre will record the necessary information and locate the nearest available ambulance using the IT software to immediately dispatch it to the accident/patient site.

The trained manpower will provide appropriate pre-hospital care to stabilize and then transport the patient to the nearest health facility, making best use of what is known as the “Golden Hours” after an emergency.

All ambulances are fitted with GPS enabled software for real time monitoring of the personnel as well as vehicles through a central command and control cell that will be based in the state capital.

Each ambulance will operate 24×7 in two shifts of 12 hours each. In each shift there will be one trained driver/pilot as first responder and one emergency medical technician (EMT) on board.

Another set of trained pilots and EMTs will rotate as a reliever unit. Each district headquarter will have one district nodal person to monitor and coordinate the operations.

All the 90 ambulances have been allotted equitably considering various parameters such as assembly constituency, population base and geographical locations.

Of the 90, 30 ambulances have been procured by the state government with support from North-East Special Infrastructure Development Scheme (NESIDS), while 48 ambulances were procured through Government of India Scheme for Special Assistance to States for Capital Expenditures.

The National Highway and Infrastructure Development Corporation Ltd (NHIDCL) has donated 10 ambulances under its corporate social responsibility (CSR) activity and 2 ambulances have been donated by the Airport Authority of India (AAI) to Longding district.

The chief minister while congratulating the people on the achievement, expressed gratitude to the central government, NHIDCL and AAI for their contributions in assisting the state government provide the service to the people.

Reportedly, 35 states and union territories in the country have implemented the 108 Emergency Response service project through PPP mode.