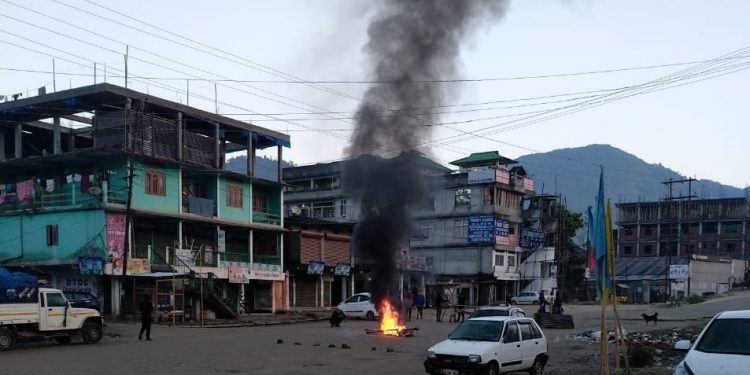 Day one of the 48-hour Itanagar bandh remained largely peaceful on Thursday with no major incidents of violence being reported.

The organizations have been alleging that the joint high power committee (JHPC) led by Environment and Forest minister Nabam Rebia which has been constituted to look into the matter had submitted its report without proper verification of facts and the same should be rectified before it is tabled before the assembly.

Though there were reports of agitators burning tyers and creating blockades at the national highway near the Chandranagar area, the police and para-military personnel on duty were quick to disperse them.

Speaking to reporters later on the day, capital superintendent of police, M Harsha Vardhan said that a total of 27 people were arrested by the police in connection to the bandh.

He said that the protestors, who were mostly youths, were picked up from the Itanagar, Naharlagun and Nirjuli areas.

“The district administration has already declared the bandh call illegal. There were no reports of major incidents and reports of only sporadic stone pelting were received in the morning hours. We have identified the persons behind the bandh call and strict action would be taken against them soon,” the SP said.

Harsha Vardhan also said that there is extensive deployment of security personnel and urged the people to carry on with their day to day routines without any fear.

Representatives of a number of communities that are not recognised as Scheduled Tribes (STs) in the state have been demanding that they be provided resident certificates as they have been living in the state for decades.