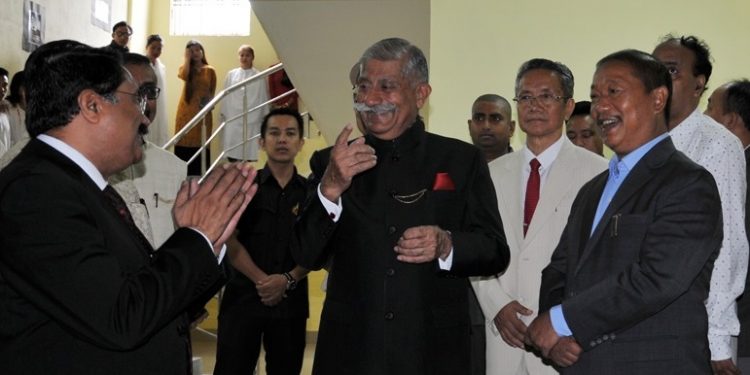 Arunachal Pradesh Governor Brig (Retd) B D Mishra on Monday inaugurated the new auditorium of the Rajiv Gandhi University (RGU) at its campus in Rono Hills.

Constructed at the cost of Rs 10.21 crore and funded by Ministry of Development of North Eastern Region (DoNER), the facility at present houses the fine arts department of the university.

Interacting with the faculty and the students on the occasion, the Governor advised the university authority and students for maximum utilization of the facility.

“You are fortunate for such a beautiful facility,” the Governor said while recalling the challenges of his student period.

The Governor, who is chief rector of RGU and brand ambassador of Swachh Bharat Mission emphasized that the new auditorium must be given good upkeep.

Earlier, on his arrival at the RGU campus, the Governor paid tributes at the ‘Wall of Heroes’.

The Wall of Heroes, an initiative of the Vidya Veerta Abhiyan under the aegis of the Ministry of Human Resource Development, pays homage to war heroes decorated with ‘Param Vir Chakra’ gallantry award.

The portraits of 21 war heroes were handed over to the RGU in a distribution ceremony at National Media Centre, New Delhi by the Ministry.

RGU is one of the first central universities in the Northeast to make and dedicate such display in the best spirit of nationalism.