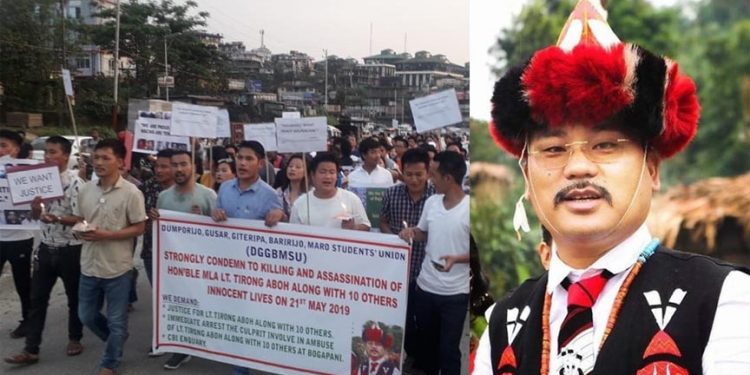 A large number of people from all walks of life on Tuesday participated in a candlelight vigil that was taken out at Itanagar by the Arunachal Civil Society (ACS).

The march was taken out to express solidarity with the bereaved family members of Khonsa West MLA late Tirong Aboh and 10 others who were killed by suspected militants in an ambush at the 12 Mile area in Tirap district on May 21.

The candlelight vigil which was also participated by several student organizations of the state including the All Tirap, Changlang, Namsai and Longding Students’ Union, Dera Natung Government College Students’ Union and Rajiv Gandhi University Students’ Union started from the Aakashdeep shopping complex at Itanagar.

Carrying placards and shouting slogans of “We are proud Indians and NSCNs are terrorists” and “Save TCL and Arunachal,” the participants walked all the way till the Tennis Court in Indira Gandhi Park where the rally turned into a mass gathering.

Addressing the gathering, leaders of the student organizations and ACS strongly condemned the assassination of MLA Aboh, his son and 10 others by the insurgents and termed it as a cowardly act.

The speakers also demanded the government to hand over the case to the Central Bureau of Investigation (CBI) or National Investigation Agency (NIA) so that the culprits behind the killings are arrested at the earliest.

Legislator Aboh was on his way to Khonsa, the district headquarters of Tirap from Dibrugarh, Assam, on the fateful day when suspected Naga militants opened fire on his convoy (comprising four vehicles). Also among the dead were two police personnel.

Following the incident, a massive counter-insurgency operation has been launched by the security forces in the jungles of Tirap, Longding and Changlang (TLC) districts, however, no arrests have been made so far.

Aboh had contested this year’s assembly elections as a National People’s Party candidate and also retained the Khona West assembly constituency by defeating his lone rival, Phawang Lowang of the BJP by 1055 votes.

Aboh was first elected from the constituency in 2014 on a People’s Party of Arunachal ticket. He had later joined the Congress during former chief minister Nabam Tuki’s reign after which he was also inducted as cabinet minister for a period of around 4 months.

Meanwhile, the All Arunachal Pradesh Students’ Union (AAPSU) has also announced to organize a candlelight vigil in all the district headquarters of the State soon to condemn the gruesome killings.

Terming the killings of the MLA and 10 others a “political murder”, the Union has also demanded that a NIA inquiry be initiated into the killing at the earliest.

AAPSU has called upon the State as well as the government at the Center to demonstrate strong “political will” and resolve the insurgency issue that torments the Tirap, Changlang and Longding (TCL) region once and for all.

The Arunachal Law Academy had on Monday evening organized a similar march at the Lekhi Village area near here.